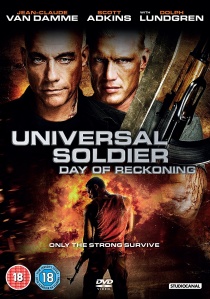 Renowned for its high-octane battles to the death, the famous franchise returns, reuniting screen action legends Jean-Claude Van Damme and Dolph Lundgren reprising their famous roles, in Universal Soldier Day Of Reckoning, released on DVD and Blu-Ray on 4th February 2013 courtesy of StudioCanal.

Surviving Universal Soldiers (Unisols) Luc Deveraux (Van-Damme) and Andrew Scott (Lundgren), battle anarchy in an attempt to build a new order ruled by Unisols without Government oversight. They take wayward Unisols whom the Government have been secretly operating as remote-controlled sleeper agents. Their mission is to liberate these Unisols from the implanted memories and the lies the Government have inserted in them.

After recovering from a coma, Unisol John's (Scott Adkins - The Expendables II) memory is foggy as he experiences the symptoms of amnesia. Struggling to put the pieces together, flashbacks of the brutal attack that put him into the coma begin to slowly force his memory back into place, as he remembers the brutal murders of his wife and daughter during the attack. Unable to erase the horrific images of the violent crime, he is determined to avenge his family. However, as his flashbacks seemingly reveal the perpetrator, he discovers he may have more in common with the cold-hearted killer than he would like.

Each film more explosive than the last and filled with visually impressive and vicious fight sequences, Universal Soldier Day Of Reckoning features a cast and crew well seasoned in the craft of bringing gritty, hard-core combat to the screen, including director John Hyams (Dragon Eyes, Universal Soldier: Regeneration).

Universal Soldier Day Of Reckoning will be available to own on DVD and Blu-ray on 4th February 2013 courtesy of StudioCanal and will also available as a limited edition 3D & 2D steelbook, exclusively in HMV. 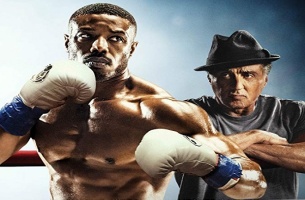 HotDVDBDUHD
Facing an opponent with ties to his family's past, Creed II, released on DVD, Blu-ray and 4K UHD 25th March 2019 from Warner Home Video, is about going back to basics to rediscover what made you a champion in the first place, and remembering that, no matter where you go, you ... END_OF_DOCUMENT_TOKEN_TO_BE_REPLACED
Comments
DVD Releases News Pick