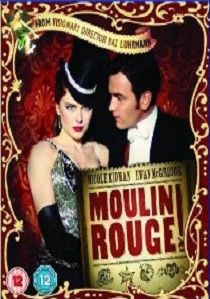 Flaunting a new high-definition transfer and spectacular picture-in-picture experience, both Blu-ray discs of the award-winning films boast new uncut footage, BD-LIVE: Live Lookup Powered by IMDb, as well as a host of other never-before-seen material produced by Luhrmann and his creative team at Bazmark. And for first time ever, Moulin Rouge! includes an alternate opening sequence featuring the Cat Stevens hit 'Father and Son'.

Widely credited with reinventing the modern movie musical, Moulin Rouge! exploded onto screens when it debuted in 2001. Celebrating some of the best-loved popular music of the twentieth century, the film found audiences ready to enjoy the same break-into-song storytelling currently enjoying its latest reincarnation in the popular television series Glee.

Along with a multi-platinum selling soundtrack led by the single "Lady Marmalade", the film went on to broadly influence fashion, music, design and popular culture, and was nominated for eight Academy Awards including Best Picture, winning two for Catherine Martin's production design and costume design.

Nicole Kidman (The Hours, Australia) sizzles in her Oscar-nominated role as Satine, the seductive courtesan and star of a popular French nightclub that caters to society's decadent elite. When she unwittingly draws Christian, a struggling writer played by Ewan McGregor (Amelia), into her spell, true love turns to tragedy. Moulin Rouge! offers a kaleidoscopic ride through a world of song, dance, romance and drama that celebrates truth, beauty, freedom and above all things, love.

Inventive, unconventional, controversial, Luhrmann's Oscar-nominated adaption of William Shakespeare's Romeo+Juliet finds the star-crossed lovers in the modern world of Verona Beach where Romeo drives a car and Juliet packs a gun. Set to a thumping soundtrack, amidst the threat of gunfire and the delicate embrace of forbidden love, the audience is invited to drink from an intoxicating cinematic cocktail that takes them on a ride from Romeo and Juliet's budding love, their first kiss, through to their separation and ultimate demise.

Considered a modern classic, this iconoclastic film adaptation that redefined the timeless tale for a new generation stars a pre-Titanic Leonardo DiCaprio (Shutter Island, Inception) and Claire Danes (The Family Stone, Shopgirl), as the youthful star-crossed lovers. The film went on to achieve box office success and widespread acclaim, a multi-platinum soundtrack album, and won four BAFTA Awards including the David Lean award for best direction and two Berlin Film Festival awards including the Silver Bear for Leonardo DiCaprio's performance as Romeo.

The Moulin Rouge! and William Shakespeare's Romeo+Juliet Blu-ray Disc releases are just one aspect of Twentieth Century Fox Home Entertainment's yearlong campaign to honor the studio's 75th birthday. This year the division will debut several select fan-favorites on Blu-ray for the first time ever including The Sound Of Music 45th Anniversary Edition, The Rocky Horror Picture Show: 35th Anniversary, and the Alien Anthology.

HotUHD
Say the 'B' word three times and have a wonderful Day-O as Tim Burton's Beetlejuice arrives for the first time on 4K UHD 31st August 2020 from Warner Home Video. END_OF_DOCUMENT_TOKEN_TO_BE_REPLACED
Top PicksView