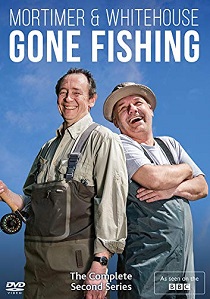 NewsTV SeriesComedySpecial InterestPaul WhitehouseBob Mortimer
News Article Go back to homepage
Follow Bob Mortimer and Paul Whitehouse as they once again as they fish side by side in some of the most stunningly beautiful locations as the second series of Mortimer and Whitehouse: Gone Fishing is released on DVD and Blu-ray 7th October 2019 from Dazzler Media.
Bob Mortimer, Paul Whitehouse
Leo McCrea, Will Yapp
Nicky Waltham, Stephanie Fyfe, Luke Holland
Dazzler Media
3 hours 0 minutes
07/10/2019
#GoneFishing Series 2
Thank you for supporting DVD365.net when you order using the link(s) below. As an Amazon Associate we earn from qualifying purchases
Buy DVD
Buy BD
Information

Paul is in charge of the fishing while Bob is in charge of the accommodation and cooking heart-healthy food. From recipes, regrets, relationships and rituals; to childhood, comedy and the countryside, the pair discuss everything alongside the ever-present shadows of showbiz and mortality.

Across six half-hour episodes, cameras will look-on as they dissect life & death against a backdrop of some of the prettiest places in the British countryside. Bob is still a keen apprentice and eager to learn how to catch fish while experienced angler Paul once again has his patience tested as he tries to teach Bob the rules of the river.

HotDVDBD
King Of Thieves, released 21st January 2019 on DVD and Blu-ray from StudioCanal, is the incredible true story of the spectacular Hatton Garden diamond heist, the biggest and most daring in British history. END_OF_DOCUMENT_TOKEN_TO_BE_REPLACED
Comments
UHD Releases News Pick

UHD
Pixar Animation Studios presents Cars, the high-octane adventure comedy that shows life is about the journey, not the finish line, zooming in for the first time on 4K Ultra HD 19th July 2021, exclusive to Zavvi. END_OF_DOCUMENT_TOKEN_TO_BE_REPLACED
Top PicksView