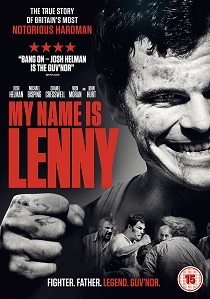 Explosive and brutal, My Name Is Lenny, released on DVD and Blu-ray 16th June 2016 from Lionsgate Home Entertainment, is based on the true story of Britain's most notorious bareknuckle fighter: Lenny McLean (Josh Helman, Mad Max: Fury Road). A known associate of The Krays, Charles Bronson and Ronnie Biggs, Lenny was an East End icon, bouncer and enforcer at the centre of the unlicensed boxing world.

DVD
Inspired by real-events, The Serpent, released on DVD 22nd February 2021 from ITV Studios Home Entertainment, tells true story of how Charles Sobrajh, one of the most elusive & wanted criminals was ... END_OF_DOCUMENT_TOKEN_TO_BE_REPLACED
Hot PicksView