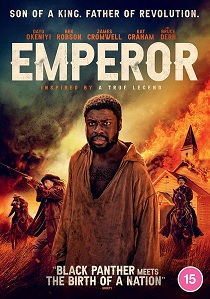 An inspirational and timely portrait of courage and resilience set during a turbulent time in American history, this epic story is inspired by the legend of 19th century freedom fighter, Shields "Emperor" Green, a descendant of African kings turned outlaw slave in the pre-Civil War South.

A man fighting to free his family and bring an end to tyranny, Emperor fights his way north, joining forces with abolitionist John Brown for a daring raid on Harper's Ferry, helping to alter the course of American history in the process.