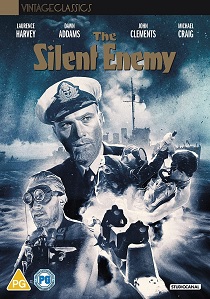 Directed by William Fairchild, The Silent Enemy is a newly restored 1958 war film based on the real Lionel 'Buster' Crabb who vanished during a reconnaissance mission for the MI6, played by Laurence Harvey.

In 1941, Britain was sustaining enormous losses fighting a war on three fronts against an ever increasing Axis power. To add to their problems, the Italians have recently created a new form of warfare - Frogmen - an intrepid band of men who travel astride small torpedo-type vessels, and attach explosive charges to the hulls of enemy ships, below their waterline.

A young Naval Lieutenant, 'Buster' Crabb, an expert in mine and bomb disposal, is sent to Gibraltar to try and combat this new threat. Never having dived before, he sets to work to master the technique of underwater operations, and soon he and his team are able to locate many of the frogmen's charges and render them harmless. But with an invasion of North Africa imminent, time is not on the Allies' side.

The Silent Enemy is released on DVD and Blu-ray 11th April 2022 from StudioCanal.

Related Articles
The Manchurian Candidate, Darling, F For Fake: The Criterion Collection, Walk on the Wild Side, Innocents In Paris: Vintage Classics, I Am A Camera: Vintage Classics
I Was Monty's Double, Will Any Gentleman..?
Comments
Hot Pick

HotDVDBD3D-BDUHD
The producers of Godzilla reimagine the origins of one the most powerful monster myths of all in Kong: Skull Island, released on DVD, Blu-ray, 3D Blu-ray and UHD on 24th July 2017 from Warner Home Video. END_OF_DOCUMENT_TOKEN_TO_BE_REPLACED
Top PicksView