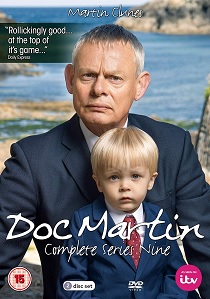 Dr. Martin Ellingham (Clunes - Men Behaving Badly, Warren), is back for eight new episodes of the ratings winning drama as the sole GP of a sleepy town. With a brusque bedside manner and a phobia of blood, he continues to treat and challenge the community of the idyllic hamlet of Portwenn in Cornwall.

Caroline Catz (DCI Banks, In Fabric) once again stars as Doc Martin's wife Louisa Ellingham, who has resigned from her job as headmistress at the local school to pursue a new career in child counselling. Concerned that their son James Henry is becoming too much like his father, she considers whether they should try for a little brother or sister. But with her career change and Martin under review from the General Medical Council following complaints from his patients, is now the right time?

They are joined by a roster of special guest stars: Danny Huston (Wonder Woman, Stan & Ollie) plays Robert Brooke, a man who is shot by a farmer who thinks he is stealing eggs, Conleth Hill (Game of Thrones, Dublin Murders) plays a GP who is sent to assess Martin and Tom Conti (Paddington 2, Four Seasons) plays an eminent surgeon.

DVD
For the first time in the cinematic history of Spider-Man, our friendly neighborhood hero's identity is revealed in Spider-Man: No Way Home, released on DVD, Blu-ray and 4K UHD 4th April 2022 from Sony Pictures Home ... END_OF_DOCUMENT_TOKEN_TO_BE_REPLACED
Top PicksView