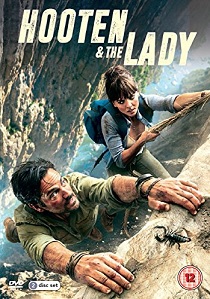 Get ready for a brand new rip-roaring adventure Hooten and the Lady, which follows the hilarious escapades of a hugely charismatic American treasure hunter and his fantastically feisty partner in crime as they travel the world in search for hidden treasures. This rope-swinging romp comes to DVD courtesy of RLJ Entertainment's Acorn label on 28th November 2016, following its run on Sky1.

In the darkest Amazon, Lady Alexandra Lindo-Parker (Ophelia Lovibond - W1A, Mr Popper's Penguins) - on an expedition for the British Museum to find the remains of a lost Edwardian explorer - runs into Hooten (Michael Landes - Final Destination 2, Love Soup), a rough and ready, uncompromising American explorer with a tragic past and occasional charm. They immediately and utterly fail to get on, but dangerous circumstances keep them together as they fall off mountains and out of helicopters and they find and lose a legendary city of gold.

As the pair battle through snake-filled jungles, we learn of Hooten's mysterious past and Alex's impending nuptials to vet Edward (Jonathan Bailey - Broadchurch, W1A), and an unlikely bond is formed. Now a unit, and with the brilliant and eccentric support of Ella (Jessica Hynes - Spaced, W1A) and Clive (Shaun Parkes - Line of Duty, The Mummy Returns) at the Museum - they travel the world from the Vatican to The Himalayas, the Amazon to Egypt, in their quest to save the world's lost treasures.

UHD
Now more stunning than ever before, return to the stunning locations and epic adventures in Peter Jackson's Middle-earth in The Hobbit Trilogy, arriving on stunning 4K UHD 30th November 2020 from ... END_OF_DOCUMENT_TOKEN_TO_BE_REPLACED
Top PicksView