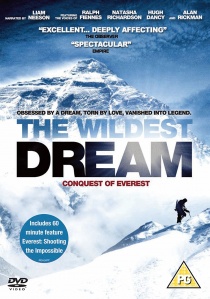 The Wildest Dream: Conquest of Everest (2010)

The Wildest Dream: Conquest of Everest is a stunning feature documentary retracing British explorer George Mallory's final attempt to reach the summit of Mount Everest in 1924 and become the first person to conquer the world's highest peak. The Wildest Dream is available on BBC DVD and Blu-Ray from the 5th September 2011.

George Mallory risked everything in pursuit of his dream. He was last seen alive just 800 feet below Everest's peak, before the clouds closed in and he disappeared into legend. His death stunned the world. 75 years on renowned mountaineer Conrad Anker discovered Mallory's frozen body high in the mountain's 'death zone'. Remarkably all Mallory's belongings were found intact. The only thing missing was a photograph of his wife, Ruth, which Mallory had promised to place on the summit if he succeeded.

Haunted by Mallory's story, Anker returns to Everest with British climbing prodigy Leo Houlding to unravel the mysteries surrounding his disappearance. Using the poignant and evocative letters between Mallory and his beloved Ruth, the film combines previously unseen archive photographs, specially restored film footage from 1924 and dramatization with the present-day story of Anker's expedition.

Featuring the vocal talents of Liam Neeson and Ralph Fiennes, Hugh Dancy, Alan Rickman and the late Natasha Richardson, The Wildest Dream is a story of love, obsession and breathtaking adventure. The film was successfully released in cinemas and giant screen theatres around the world in 2010 to widespread critical acclaim and the UK television premiere is on BBC Two in August 2011.

UHD
In Disney's Mulan, released on DVD, Blu-ray and 4K UHD 10th November 2020, a fearless young woman risks everything out of love for her family and her country to become one of the greatest warriors China has ever known. END_OF_DOCUMENT_TOKEN_TO_BE_REPLACED
Top PicksView