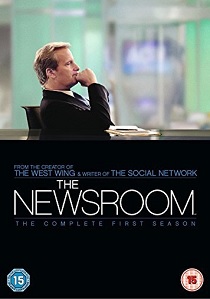 From the mind of Aaron Sorkin, , creator of The West Wing and screenwriter of The Social Network and Moneyball, comes The Newsroom, a behind-the-scenes look at the people who make a nightly cable-news program, released on DVD and Blu-Ray by Warner Home Video on 22nd July 2013.

A favourite with viewers, news anchor Will McAvoy (played by Jeff Daniels) has found a safe niche with bankable ratings on his 8:00 p.m. flagship cable show, "News Night". Numbed by success, McAvoy has become stoic, complacent and cynical, content not to rock the boat as he delivers the nightly news straight down the middle of the road. In a literal blink of an eye, McAvoy is catapulted from apathy to engagement when a spontaneous outburst leads him to tackle the principles of American patriotism in a public forum prompting his staff to jump ship.

Setting the stage for Will's return, his boss Charlie covertly orchestrates the hiring of his ex-girlfriend, MacKenzie McHale (Emily Mortimer), as his new executive producer. With their shared past, she knows exactly how good he can be. Even more unsettling for him, she challenges Will to abandon the successful, middle-of-the-road approach that has made him so popular with both sides of the aisle, and realize his full potential by delivering the news with integrity.

The all-star cast of The Newsroom is headlined by Jeff Daniels (Golden Globe nominee for The Squid and the Whale) as Will McAvoy and Emily Mortimer (Hugo) as MacKenzie McHale. Also starring are: Sam Waterston (Academy Award® nominee for The Killing Fields) as Charlie Skinner; John Gallagher, Jr. (Tony winner for Spring Awakening) as Jim Harper; Alison Pill (HBO's In Treatment) as Margaret Jordan; Thomas Sadoski (Tony nominee for Reasons to Be Pretty) as Don Keefer; Dev Patel (Slumdog Millionaire) as Neal Sampat; Olivia Munn (I Don't Know How She Does It) as Sloan Sabbith; and two-time Academy Award® winner Jane Fonda (Klute, Coming Home) as ACN's corporate owner.

HotDVDBD3D-BDUHD
The grave course of events set in motion by Thanos that wiped out half the universe and fractured the Avengers ranks compels the remaining Avengers to take one final stand in Marvel Studios', Avengers: Endgame, released on DVD, Blu-ray, 3D Blu-ray and 4K-UHD 2nd September 2019 from Walt Disney Home Entertainment. END_OF_DOCUMENT_TOKEN_TO_BE_REPLACED
Top PicksView