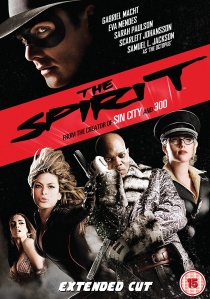 Boasting a phenomenal, all-star cast, including Samuel L. Jackson, Eva Mendes and Scarlett Johansson, directed by Sin City writer and co-director Frank Miller and based on the classic 1940's newspaper cartoon strip by Will Eisner, The Spirit is released on DVD and Blu-Ray Disc on 25th May 2009 from Lionsgate Home Entertainment.

Containing additional, darker footage not shown in cinemas, The Spirit is released on DVD and Blu-Ray Disc in its extended, definitive form. A stunningly rendered and beautifully stylised comic strip action-adventure, The Spirit is the story of a hero born, murdered and born again.

Rookie cop, Denny Colt, AKA The Spirit (Gabriel Macht, The Good Shepherd, The Recruit) returns from the dead to fight crime from the shadows of the Gotham-like Central City. But he brings with him an irresistible sex appeal that hinders his quest as much as it helps.

A hero driven by a mission to fight the forces of evil and corruption, The Spirit meets his nemesis in the form of The Octopus (Samuel L. Jackson) a megalomaniac master of disguise who does not think twice about killing anyone unfortunate enough to see his face.

As The Octopus threatens to destroy Central City, heroic crusader The Spirit tracks the cold-hearted killer from the city's rundown warehouses to its damp catacombs and the windswept waterfront, seducing or being seduced by a series of beautiful women who either want to love him or kill him.

With Eva Mendes as the breathtakingly sexy Sand Saref and Scarlett Johansson as Silken Floss, this is a beautifully stylised evocation of the cult comic strip that needs to be seen on DVD and Blu-ray Disc to be truly appreciated in all its uncut glory.

UHD
One of the most compelling and conflicted characters in Sony Pictures Universe of Marvel Characters comes to the big screen as Jared Leto transforms into the antihero Michael Morbius as Morbius is released on 4K Ultra HD, Blu ... END_OF_DOCUMENT_TOKEN_TO_BE_REPLACED
Top PicksView