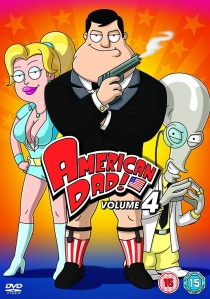 Die-hard CIA agent Stan Smith is back in another outlandishly funny season of American Dad from Emmy Award-winning executive producer, Seth MacFarlane (Family Guy). Join Stan and his hilariously odd family as they get themselves into more ridiculous situations in the small town of Langley Falls, Virginia, in the rib-cracking fourth season. American Dad: Volume 4 is released to buy on DVD on 20th April 2009 from Twentieth Century Fox Home Entertainment.

The latest season follows the day-to-day lives of the eccentric Smith family, who are full of radically different personalities and are just trying to find a way to love and trust each other during these increasingly unpredictable times. Stand-out plots include Roger thinking that someone has stolen his identity after stealing his credit card and maxing it out, Steve plotting revenge against all of the popular girls at school who torment nerds and losers, and Stan suffering with depression and goes on holiday back to Camp Refugee for three weeks.

So before beginning this hysterical journey, why not meet the Smith family...

Once again, Seth MacFarlane delivers yet another humerous volume of the much-loved show, American Dad: Volume 4 consists of 14 more outrageously funny episodes along with some fantastic special features including laugh-out-loud deleted scenes and featurettes.

HotDVDBD3D-BDUHD
The producers of Godzilla reimagine the origins of one the most powerful monster myths of all in Kong: Skull Island, released on DVD, Blu-ray, 3D Blu-ray and UHD on 24th July 2017 from Warner Home Video. END_OF_DOCUMENT_TOKEN_TO_BE_REPLACED
Top PicksView