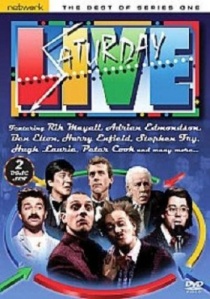 Network is delighted to announce the first ever UK DVD release of the groundbreaking and highly acclaimed comedy show Saturday Live: The Best Of Series One. This two-disc set, containing performances from the first series, showcases some of the best acts from the broad spectrum of the British alternative comedy circuit throughout the eighties. This landmark Channel 4 show will be available to buy on DVD on 16th April 2007.

Created by leading comedy producer Paul Jackson (The Young Ones) and based on the format of American show Saturday Night Live, Saturday Live was broadcast on Channel 4 between 1985 and 1987 and brought the live alternative comedy circuit to a UK TV audience plus a handful of music acts for good measure. Some of comedy's most iconic characters made their name and owe their success to the show, including Harry Enfield's Stavros and Loadsamoney.

Saturday Live would also make a huge star of Ben Elton as a performer, who had previously been known for his writing, who started out as one of the guest hosts and who would then go on to become the permanent presenter of the programme's latter incarnation Friday Night Live.

So join acts including Ben Elton, Rik Mayall and Ade Admonson (The Dangerous Brothers), Harry Enfield, Dawn French, Jennifer Saunders, Stephen Fry, Hugh Laurie, Pamela Stephenson, Emo Philips plus many more for a riotous trip down alternative comedy memory lane in this comedy release that will have you in stitches.

The acts on the shows are: