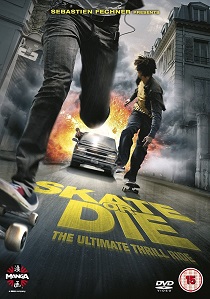 Join in the thrill ride and choose to Skate Or Die, when the adrenalin-fuelled adventure is released on DVD from 5th April 2010, courtesy of Manga Entertainment. From the producers of Mesrine: Public Enemy No. 1 and starring the sassy and gorgeous Elsa Pataky (Snakes on a Plane) this action-packed and effortlessly cool thriller sees two stoner friends and their skateboarding skills put to the ultimate test when they find their lives in danger.

After witnessing the murder of a notorious drug dealer by a trigger-happy gang of crooked cops, Jerome (Micky Mahut) and Benjamin (Idriss Diop) are forced to navigate the streets of Paris in a desperate attempt to elude the wrong arm of the law and escape with their lives, calling on the help of their friends and even enemies along the way.

With a thumping soundtrack including artists such as Placebo, Just Jack and Tricky, incredible skateboarding sequences and a non-stop sense of peril that doesn't let go until the final frame, Skate Or Die is the film every action and skateboarding fan has been waiting for!