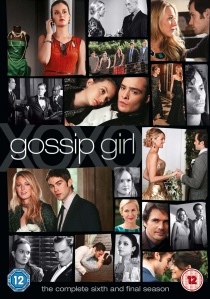 Everyone's favourite Upper East Siders join forces for one last fashionable soirée, loaded with sizzling scandal, fabulously orchestrated scheming and the revelation of Gossip Girl's true identity, in Gossip Girl: The Complete Sixth Season, which lands on DVD on the 18th of February 2013, courtesy of Warner Home Video. The complete Gossip Girl Season 1 - 6 is also out on DVD on the same day.

In the sixth and final season the frenemies take on one another like never before as the now successful writer Dan, with some help from unlikely ally Georgina (Michelle Trachtenberg), writes a set of scathing tell-all serialised articles that incite trouble for him and all his friends, including his relationship with father and a newly rekindled romance with Serena.

An encounter abroad leads Chuck and Blair to make a promise to each other but the price is high, leaving them apart once more. To make amends, Chuck sets out on a mission to eliminate his father by undergoing an extensive investigation into past dealings, but is not prepared for what he uncovers in the process.

Blair; the new head of Waldorf Designs prepares her debut fashion line as, but unexpected scheming causes a scandal, setting in motion disasters that call for her mother's imminent return. As the head of The Spectator, Nate is making his own decisions and is ready to go up against Gossip Girl, but after making a difficult decision he lands in a place that he never thought he would be.

Don't miss the twists and turns of unlikely relationships and shocking revelations with Gossip Girl: The Complete Sixth Season on DVD from 18th February. The complete Gossip Girl Season 1-6 on DVD also out on the same day.

UHD
After more than thirty years of service as one of the Navy's top aviators, Pete 'Maverick' Mitchell is back where he belongs as Top Gun: Maverick flies onto DVD, Blu-ray and 4K UHD 31st October 2022 from Paramount Home ... END_OF_DOCUMENT_TOKEN_TO_BE_REPLACED
Top PicksView