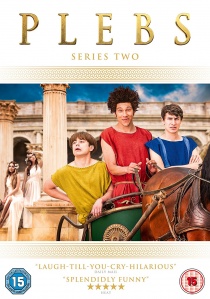 All roads lead to Rome for the return of the multi-award winning comedy Plebs in a brand new eight part series released on DVD on 5th January 2015, courtesy of Universal Pictures (UK).

Since series one the world has progressed (from 27BC to 26BC) but flat-mates Marcus (Tom Rosenthal), Stylax (Joel Fry) and slave Grumio (Ryan Sampson) have made no strides whatsoever. Marcus' ongoing crush Cynthia (Sophie Coliquhoun) is still ignoring his advances, with her own slave Metella (Lydia Rose Bewley) on hand with a sarcastic quip to keep him at bay. Stylax wants Marcus to move on so that they can realize their dreams of being 'the big men of Rome'. For Stylax this also means becoming a champion charioteer. Who cares if he can't drive?

A modern comedy in an ancient setting. Follow the antics of these three under achievers on their desperate quest to live the 'when in Rome' maxim to the full. Featuring special Guest Stars Simon Callow, Shaun Williamson, Neil Stuke, Lauren Socha, Tim Key, James Fleet and Paul Ritter.