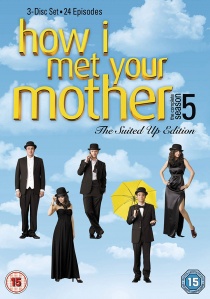 Starring Jason Segel, Alyson Hannigan and Neil Patrick Harris, How I Met Your Mother, released on DVD by Twentieth Century Fox on 8th November 2010, continues with its fifth season seeing viewing figures hitting an all time high as more and more people join the How I Met Your Mother movement!

Ted starts his first day as an architecture professor; and Barney and Robin reveal the relationship they had during the summer and end up parting. As expected, Barney immediately returns to his old ways, and uses the playbook to pick up women. while Ted begins dating a graduate student named Cindy (Rachel Bilson, Jumper, The O.C.) who turns out to be the roommate of his future wife!

As well as including all 24 episodes of the fifth season of How I Met Your Mother and a selection of extras, the DVD box-set includes a brand new addition - Clips to Go®! Clips to Go is a selection of short clips hand-picked by the show creators a well as exclusive video mash-ups, all easily transferable to your portable video device for you to enjoy everywhere. They are promotional and viral in nature, easy to share with your friends via email, Facebook, MySpace. They do not require an active local iTunes Video store.

BD
After moving to a new town, two brothers discover that the area is a haven for vampires as the classic The Lost Boys is released on 4K UHD 20th September 2022 from Warner Home Video. END_OF_DOCUMENT_TOKEN_TO_BE_REPLACED
Top PicksView