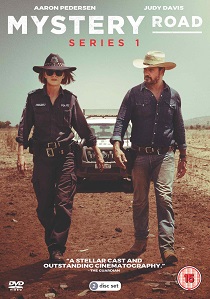 Described as 'Australia's answer to True Detective', Mystery Road is a riveting, ambitious new crime drama, set against the stunning backdrop of Australia's outback. It sees Aaron Pederson reprise his critically acclaimed role as Jay Swan, a tough indigenous detective, who is brought in to investigate the shocking disappearance of two young men in a remote town, alongside tough-as-they-come cop Emma James, played by multi-award winner Judy Davis.

Big landscapes, stunning scenery and incredible lakes of crystal blue water set against desert mountains. This is Boulder Ridge, the remote town Jay Swan (Pederson - Jack Irish, A Place To Call Home) is sent to when two young farmworkers go missing from an outback cattle station. Teaming up with local cop Emma James (Davis - Feud, Serving in Silence), the duo start to uncover the men's secrets and soon find themselves unpeeling the hidden layers of the town's dark history, becoming embroiled in a deep mystery that will send shockwaves through the community.

A hard-boiled case, enticing action sequences and a stellar support cast including Wayne Blair, Ernie Dingo and Tasma Walton who reprises her role as Jay's wife, are complimented by 50 minutes of fantastic bonus features.

Get lost in the Australian outback and unearth the enthralling enigma of Mystery Road.