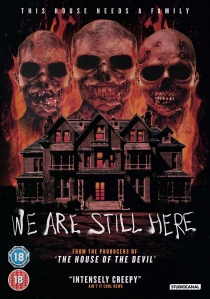 We Are Still Here, released on DVD by StudioCanal on 19th October 2015, is a tense and chilling ghost story from the producers of The House of the Devil and Cheap Thrills.

Starring "scream queen" Barbara Crampton (Re-Animator), it tells the story of a grieving couple that discovers vengeful spirits in their new home. A horror in the tradition of Italian auteurs such as Lucio Fulci, it was one of the breakout hits of this year's FrightFest.

After the death of their college age son, Anne (Barbara Crampton: Re-Animator, You're Next) and Paul Sacchetti (Andrew Sensenig) relocate to the snow-swept New England hamlet of Aylesbury, a sleepy village where all is most certainly not as it seems.

When strange sounds and eerie feelings convince Anne that her son's spirit is still with them, they invite an eccentric, New Age couple (Larry Fessenden: I Sell the Dead and Lisa Marie: Mars Attacks!) to help them get to the bottom of the mystery. They discover that not only are the house's first residents, the vengeful Dagmar family, still there - but so is an ancient power. A primal darkness slumbers under the old home, waking up every thirty years and demanding the fresh blood of a new family.