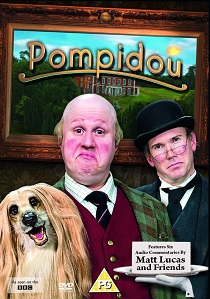 Little Britain's Matt Lucas is Pompidou, in this superb visual comedy series about an elderly oddball aristocrat who has fallen on hard times. It originally aired on BBC One and Netflix, and now Pompidou makes its DVD debut thanks to RLJ Entertainment's Acorn Label on 12th October 2015.

In a clapped-out old caravan parked in front of his now crumbling estate lives Pompidou, a tubby, pompous, penniless, yet ultimately lovable aristocrat, kept company by his long-serving and loyal butler Hove (Alex Macqueen - The Inbetweeners) and his devoted Afghan Hound Marion. But when there's no food and no money, or no heat and no money; or no money and no money, what's a man like Pompidou to do?

He tries the lottery or searches for an antique; he takes on a blind date or empties his cupboards for a jumble sale. But whatever he does, Pompidou embraces a whole new world or laughter as he tries to turn his life around - without being naughty... very naughty.

Created by Matt Lucas, alongside Julian Dutton (Chucklevision) and Ashley Blaker (The Matt Lucas Awards), this endearing slapstick comedy comes to DVD on 12th October 2015, complete with an array of excellent special features including Behind the Scenes and Bloopers.