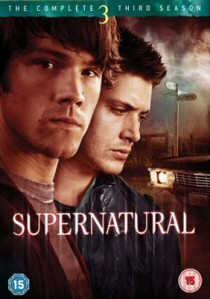 The brothers are back. Sam and Dean Winchester return to the small screen and continue their fearless quest to rid America of paranormal evil, as Supernatural Season 3 and Supernatural Season 1 - 3 are out on DVD and Box Set on 25th August 2008, courtesy of Warner Home Video.

Twenty-three years ago, Sam (Jared Padalecki) and Dean Winchester (Jensen Ackles) lost their mother to a mysterious and demonic supernatural force. Their father was part of a secret war against dark forces and from a young age raised them to be soldiers in his fight. He taught them about the paranormal evil that lives in the dark corners and on the back roads of America... and how to kill it.

Sam and Dean spent their lives on the road, battling supernatural threats and searching for the demon that killed their mother. In the climactic battle which ended the last series, they finally brought down the demon, but at a terrible cost - they were unable to stop it from unleashing 300 powerful demons from hell. And in a shocking turn of events, Sam was killed in the fight. Unable to go on without his brother, Dean made the ultimate sacrifice. He summoned a demon and exchanged his soul for the life of his brother. The deal brought Sam back to life - but left Dean with a single year to live.

Now, Sam and Dean face an all-out war. As they work to stem the rising tide of demonic activity, they continue to travel the country, battling the supernatural wherever they encounter it. Despite battling changelings, cursed objects, vampires, witches, malevolent spirits, even a very un-merry Anti-Claus, the supernatural is the least of their problems.

DVD
Will Smith and Martin Lawrence are back on the case in the roles that launched the dynamic duo to global superstardom in Bad Boys For Life, arriving on DVD, Blu-ray and 4K UHD 25th May 2020 from Sony ... END_OF_DOCUMENT_TOKEN_TO_BE_REPLACED
Hot PicksView