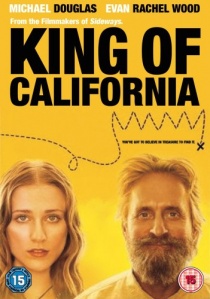 King Of California stars Michael Douglas as a fresh-out-of-the-mental institution father, and Evan Rachel Wood as his emancipated teenage daughter, as they venture together on a quest for an ancient Spanish treasure buried beneath their local Costco in this darkly funny, exciting and surprisingly hopeful take on the modern family and the American dream.

King Of California is written and directed by first-time filmmaker Mike Cahill and produced by Oscar-winning Alexander Payne (Sideways). The film makes its debut on DVD on 2nd June 2008 from Revolver Entertainment.

At the age of sixteen, Miranda (Evan Rachel Wood) has already had to live with her share of disappointments. Abandoned by her mother, she's dropped out of school and has been supporting herself as an employee at McDonald's while her father Charlie (Michael Douglas) resides in a mental institution.

When Charlie is released and sent back to their home, Miranda finds the relatively peaceful existence she's built for herself completely disrupted. Charlie has become obsessed with the notion that the long-lost treasure of Spanish explorer Father Juan Florismarte Garces is buried somewhere near their suburban California housing unit.

Armed with a metal detector and a stack of treasure-hunting books, Charlie soon finds reason to believe that the gold resides underneath the local Costco, and encourages Miranda to get a job there so that they can plan a way to excavate after hours. 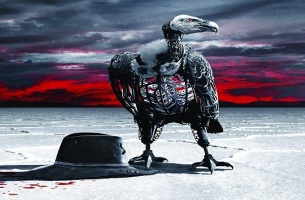 HotDVDBDUHDTVBoxset
Welcome back to Westworld, the Emmy®-winning drama series where the puppet show is over and the newly liberated 'hosts' are coming for humankind, as series two arrives on DVD, Blu-ray and 4K UHD 3rd December 2018 from Warner Home Video. END_OF_DOCUMENT_TOKEN_TO_BE_REPLACED
Comments
BD Releases News Pick

BD
A 13-year-old girl named Meilin turns into a giant red panda whenever she gets too excited in Disney and Pixar's 25th feature film Turning Red, released on DVD, Blu-ray and 4K UHD 2nd May 2022 from Walt Disney Home ... END_OF_DOCUMENT_TOKEN_TO_BE_REPLACED
Top PicksView