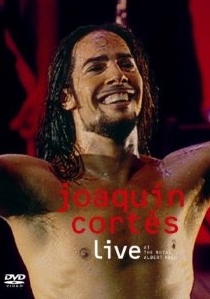 News
News Article Go back to homepage
Experience the power of flamenco in your own home with Joaquín Cortés, the Spanish flamenco dancing sensation, who's show 'Live' is being released for the first time as a 'limited tour edition' on 21st May 2007 on DVD SonyBMG to coincide with his UK shows in May at the Royal Albert Hall.
Joaquín Cortés
SonyBMG
Unknown
21/05/2007
As an Amazon Associate we earn from qualifying purchases
Buy DVD
Information

Experience the power of flamenco in your own home with Joaquín Cortés, the Spanish flamenco dancing sensation, who's show 'Live' is being released for the first time as a 'limited tour edition' on 21st May 2007 on DVD SonyBMG to coincide with his UK shows in May at the Royal Albert Hall. The DVD also includes a 30' never-before-seen interview during which Joaquín reveals his influences, his technique and his style of dancing through the various flamenco rhythms.

Joaquín Cortés has toured incessantly with "Live", with month long residencies in Madrid and Barcelona. This has seen his solo performances acclaimed as never before by a Spanish audience and also seen some of the best reviews by the Spanish dance critics, even in the traditional "bastion" of the "duende" in Seville. Aside from this, Joaquín has toured extensively in Northern Europe and also in Latin America.

Giorgio Armani once again was responsible for the new costumes. Joaquín Cortés and Juan Parilla have composed the music with contributions from Jesus Bole and Diego Carrasco. In addition to the "jondo" flamenco - the most deep in emotion - there is jazz, Cuban and classical music. "Joaquín Cortés live" includes live music that spans from Mozart to 1930s Chicago, all without losing the essential heart of where Cortés originates from - Flamenco. The show sees Joaquín returning to his roots as a solo performer, a flamenco dancer par excellénce.

Joaquín Cortés' pays homage to flamenco jondo - martinete, tangos, seguiriya - as well as capturing the infectious bulerias, light-hearted alegrías and the spirit of Old Havana from the symphonic to the soulful. Joaquín Cortés is no stranger to mixing different styles of dance. As an artist, Cortés has always been confident about who he is and where he comes from, and with that in mind, he never loses the essence of flamenco. Everything he does, if it isn't pure flamenco, becomes flamenco through the magic of his art. This art can be improved upon, but it can never be learned. You have to be born with it.

Joaquín Cortés is a mix of the classical and modern, pure and mixed styles, andaluz and universal, cordobés and New York gypsy. His grandfather was an old gypsy, a herdsman who will never be forgotten. He still maintains his roots. Joaquín Cortés, already an established part of gypsy culture like Carmen Amaya, Camaron de la Isla and Rafael de Paula, is also an originator of 21st century flamenco. Joaquín Cortés who has fire in his boots and striking looks to go with it, is now returning to his true roots.