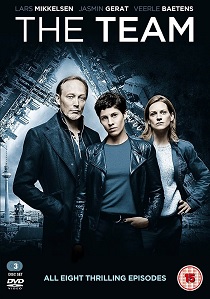 Nordic Noir & Beyond is pleased to announce the DVD Box Set release of the European crime thriller The Team on 6th March 2017. The series premiered on More4 on 17th February 2017.

When three prostitutes are murdered by being shot through the left eye in Antwerp, Berlin and Copenhagen, Europol sets up a Joint Investigations Team under the lead of Harald Bjørn (Lars Mikkelsen) from Denmark, Jackie Mueller (Jasmin Gerat) from Germany und Alicia Verbeek (Veerle Baetens) from Belgium. During their investigation 'The Team' unravels an unscrupulous criminal organisation operating across Europe.

The Team is an international production for the Danish DR, the German ZDF, the Belgian vtm, the Austrian ORF and the Swiss SRF.

DVD
A 13-year-old girl named Meilin turns into a giant red panda whenever she gets too excited in Disney and Pixar's 25th feature film Turning Red, released on DVD, Blu-ray and 4K UHD 2nd May 2022 from Walt Disney Home ... END_OF_DOCUMENT_TOKEN_TO_BE_REPLACED
Top PicksView