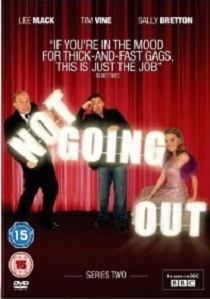 The acclaimed second series of Lee Mack's Royal Television Society and Golden Rose award-winning sitcom, Not Going Out, is set to be released on DVD for the first time by Universal Pictures on 2nd February 2009, to coincide with the BBC transmission of the much anticipated third series.

Series two sees Lee with a big problem. His flatmate Kate has moved out for good and his best mate and landlord, Tim has put the apartment up for sale. Faced with the prospect of losing the flat, not to mention his well-meaning but utterly useless cleaner Barbara (Miranda Hart, Hyperdrive and Lead Balloon), Lee rents the spare room to Tim's ambitious younger sister Lucy. The arrangement turns out to be far from perfect however with high-flyer Lucy taking on Lee in a bidding war for the flat.

Sibling rivalry turns into full-on anxiety as uptight accountant Tim quickly becomes suspicious of Lee's influence on his kid sister. To top it all, Lee starts to seriously question the suitability of Lucy's new boyfriend (Simon Dutton, The Saint and Holby City) and he finds his plans for keeping the flat are not plain sailing. On the plus side, his new domestic set-up does lead him to discover the art world, the underworld, and the lengths one man will go for tickets to an England football match

The series two DVD extras include: never-before-seen footage from the rehearsals; behind-the-scenes at a studio recording with Lee actor, comic, writer and stuntman' Mack (and Miranda Hart's bout of Tourettes); plus alternative' audio commentaries on three episodes courtesy of Lee, Tim, Katy Wix (set to appear in Series 3) and writer Andrew Collins.

HotUHD
Say the 'B' word three times and have a wonderful Day-O as Tim Burton's Beetlejuice arrives for the first time on 4K UHD 31st August 2020 from Warner Home Video. END_OF_DOCUMENT_TOKEN_TO_BE_REPLACED
Top PicksView