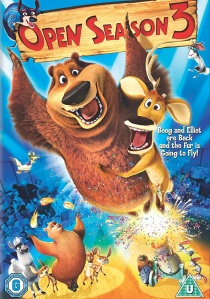 The loveable characters Boog, Elliot and their forest friends return for a third adventure in Open Season 3, making its debut on DVD on 14th February 2011, courtesy of Sony Pictures Home Entertainment.

Families will love the fun, interactive Open Season 3 bonus material, including the DVD game "Runaway RV", in which Mr. Weenie and the pet gang are out to save Boog from the circus and it's up to you to help steer them to safety. Also on the DVD is a Progression Reel, which shows a scene come to life from story sketch through final animation.

Boog, Elliot and all their forest friends return with an all-new adventure that is their fastest and furriest yet - this time in a big top circus! When Boog's buddies can't make their annual guys-only getaway, he decides to take a trip by himself. Stumbling across a visiting circus, Boog switches places with a look-alike circus grizzly and takes over his part in the act. But when the circus decides to go back to Russia, it's a race against time for Elliot, McSquizzy, Mr. Weenie and the gang to rescue Boog before it's too late!

UHD
Say the 'B' word three times and have a wonderful Day-O as Tim Burton's Beetlejuice arrives for the first time on 4K UHD 31st August 2020 from Warner Home Video. END_OF_DOCUMENT_TOKEN_TO_BE_REPLACED
Top PicksView