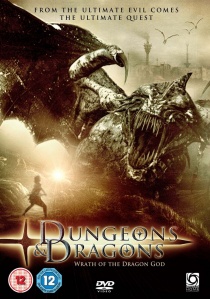 Dungeons and Dragons: Wrath of the Dragon God (2005)

Based on the ever-popular series of role-playing games, Dungeons & Dragons: Wrath of the Dragon God arrives on DVD, Blu-ray and EST from 18th January 2010 courtesy of Optimum Home Entertainment.

Featuring a world instantly familiar to Dungeons & Dragons fans everywhere, Wrath of the Dragon God is steeped in the magic and mysticism of the best fantasy epics and features the perfect blend of sword and sorcery as good once more battles bad in a fight that threatens to claim an entire mystical kingdom.

When the evil sorcerer Damodar (Bruce Payne, Passenger 57, Highlander: Endgame) braves a perilous vortex to steal the elemental black orb he declares a sinister plan of vengeance against the kingdom of Ismir. Berek (Mark Dymond, Attack Force, Caffeine), a decorated warrior, and Melora (Clemency Burton-Hill, TV's Party Animals, The Prince & Me II), an amateur sorceress join four heroes representing Intelligence, Wisdom, Honour and Strength to battle against Damodar's growing army of gruesome creatures, flying harpies and an ice dragon in order to reach a vault holding the orb. Together, the team of heroes build their own army to try and retrieve the orb before Damodar summons Falazure, the Dragon God of Decay and Undeath, whose omnipotent powers could lay waste to the entire kingdom.

BD
Released on DVD and Blu-ray 27th July 2020 from Dazzler Media, created by visionary award-winning filmmaker of The Raid, Gangs of London takes audiences on an immersive journey into the hidden heart ... END_OF_DOCUMENT_TOKEN_TO_BE_REPLACED
Hot PicksView