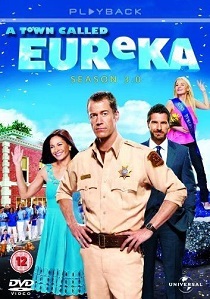 A Town Called Eureka has a huge cult audience that crosses both the comedy and sci-fi genres, and fans will be delighted to hear that Season 3.0 of this Emmy nominated, Sky 1 series is set for DVD release on 25th January 2010 from Universal Pictures (UK).

Whilst returning his daughter back to L.A., a car-crash leaves Marshal Jack Carter (Colin Ferguson) and his delinquent daughter stranded. The only place nearby is the picture perfect town of Eureka. However, Carter soon realises that nothing is as it seems. Whether it's the woman blowing triangular bubbles or a passing quartet of clones, strange things are around every street corner. After a series of unpredictable mishaps including a cow field being blasted to ashes, Jack soon learns Eureka's secret - it's a town completely inhabited by geniuses.

Set up by the government to create new scientific advances, Eureka is rife with scientific disaster after scientific disaster. However, alien paranoia, memory blackouts and killer nanites are the least of Eureka's troubles as a bodged experiment has left a tachyon accelerator ripping the seams out of the universe. Jack soon becomes the new sheriff of Eureka and must deal with the heated chemistry, dilemmas and mysteries. How will he cope being the only normal person in a town full of geniuses?