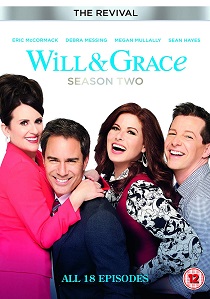 That's right, honey! A decade after their unforgettable eight-season run, comedy's most fabulous foursome is back. Debra Messing, Eric McCormack, Sean Hayes and Megan Mullally reprise their celebrated roles as Will, Grace, Jack and Karen. Released on DVD 5th August 2019 from Universal Pictures (UK), season 2 of Will & Grace features all 18 episodes.

Behold once again, from the minds of Max Mutchnick and David Kohan, TV's wittiest ensemble ever. The legendary James Burrows, director of every original "Will & Grace" episode, has returned with a slew of razor-sharp jabs and dirty martinis.

Will & Grace returned to NBC on 28th September 2017 and still stands as the network's most-watched comedy in seven years. Originally debuting in 1998 and cementing its place in the cultural zeitgeist among critics and fans alike, Will & Grace has been nominated for 88 Emmy Awards, winning 16 of them, including Outstanding Comedy Series.