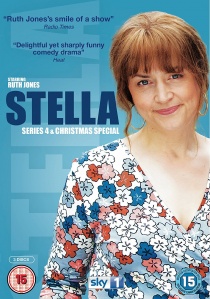 Written by and starring Ruth Jones, it's chaos as usual as Stella returns to DVD for another delightful fourth series, available on 20th April 2015 courtesy of BBC Worldwide.

The fourth series see's Michael move in and set up a legal practice in the spare room, whilst Ben is contending with girls and driving lessons, Luke is resorting to drastic measures to provide for the family, and the two Alans have opened a café. Aunty Brenda looks set to take the world of politics by storm and a blast from Celia's past puts her relationship with Alan in jeopardy, but it's Michael and Stella who take centre stage, as Stella finds herself distracted by a handsome, difficult new doctor and Michael has a mid-life crisis! The cracks start appearing in their relationship but will the pressure be too much for it to survive?

Stella series four DVD release also includes the Christmas Special where Stella is looking forward to her first Christmas with Michael, but fate steps in and scuppers her plans. Aunty Brenda's putting on a panto and Stella makes a friend on the children's ward. Welcome to Christmas in Pontyberry - full of festive delight, mince pies and turkey crowns!

BD
Finding praise from critics around the world, Boyhood, following the life of Mason, from early childhood to his arrival at college, is released on Blu-ray and 4K UHD 27th March 2023 from Arrow Films. END_OF_DOCUMENT_TOKEN_TO_BE_REPLACED
Top PicksView