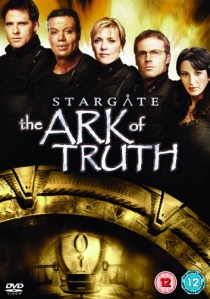 Continuing the thrilling journey of the popular Stargate SG-1 television series, the much anticipated feature-length film Stargate: The Ark of Truth is released on DVD on 28th April 2008. Released by MGM and Twentieth Century Fox Home Entertainment, it stars series favourites Amanda Tapping and Beau Bridges.

This gripping story sees the Stargate team - General Hank Landry (Bridges; My Name is Earl; The Outer Limits), Daniel Jackson (Michael Shanks; Eureka, 24), Vala (Claudia Black; Farscape, Xena: Warrior Princess), Teal'c (Christopher Judge; X-Men, Action Man), Sam (Tapping; The Outer Limits; The Void) and Cam (Ben Browder; Farscape, Party of Five) being thrust into their most exciting adventure yet. Whilst searching for the fabled Ark Of Truth, which could help them defeat the sinister Ori, SG-1 discovers it may be in the Ori's home galaxy, and must travel there aboard the Odyssey. Consequently, the Stargate team finds themselves in a distant galaxy fighting two powerful enemies.

Written and produced by current SG-1 executive producer and director Robert C. Cooper, Stargate: The Ark of Truth on DVD contains tons of bonus materials including feature-length audio commentary with Cooper, actor Christopher Judge and director of photography, Peter Woeste. Additional material includes a featurette Stargate SG-1: The Road Taken: Prelude to The Ark of Truth, and Uncovering The Truth documentary. As if that wasn't enough, the UK DVD release of Stargate: The Ark of Truth will contain a unique code to exclusive behind-the-scenes footage so don't miss out on the opportunity to own this much longed for sci-fi thriller on DVD this April. The next Stargate feature film Continuum will be released on DVD in August.

HotUHD
Now more stunning than ever before, return to the stunning locations and epic adventures in Peter Jackson's Middle-earth in The Lord of the Rings Trilogy, arriving on stunning 4K UHD 30th November 2020 from Warner Home Video. END_OF_DOCUMENT_TOKEN_TO_BE_REPLACED
Top PicksView