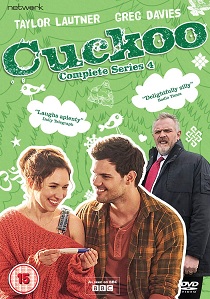 This BAFTA-nominated comedy co-stars Taylor Lautner as Dale, the Thompson's well-meaning but socially inept lodger; Esther Smith as their flighty, self-sabotaging daughter, Rachel; and Tyger Drew Honey as Dylan, their indolent liability of a son.

This fourth series re-joins the Thompson family just as Ken gets nominated for Lichfield Lawyer of the Year. Unfortunately, his dastardly work nemesis Jane has also been nominated and Ken is convinced that she'll win.

When Lorna employs underhand tactics to get baby Sid into an exclusive local nursery she hadn't reckoned on karma paying her back with an age-inappropriate new girlfriend for Dylan - and what's worse still is that she's one of Laura's old friends!

While all this is going on Dale is thinking of taking his relationship with Rachel to the next level - much to Rachel's consternation, as she's not ready to settle down yet and is getting serious wanderlust...

In Prodigal Son: Season 1, released on DVD 11th January 2021 from Warner Home Video, criminal psychologist Malcolm Bright knows how killers think and how their minds work. Why? His father is a serial killer who has taken the lives of more than 20 people.

In The Broken Hearts Gallery, released on DVD and Digital 18th January 2021 from Sony Pictures Home Entertainment, after a break-up, a young woman decides to start a gallery where people can leave trinkets from past relationships.
Movie quote