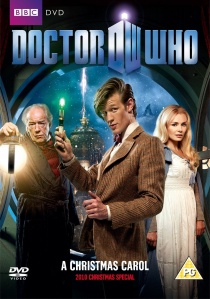 It's the deepest part of winter, the exact midpoint, Christmas Eve - half way out of the dark. Doctor Who The Christmas Special - A Christmas Carol is released on the 24th January 2011 from 2entertain.

It's the deepest part of winter, the exact midpoint, Christmas Eve - half way out of the dark. Amy and Rory are trapped on a stricken space liner that's plummeting through banks of thick icy fog to the surface of the planet below. Only one man has the power to save them; only one man is in possession of a machine that can clear the fog and let them land safely. That man is Kazran Sardick, a rich but lonely old miser who rules Sardicktown with a sky-mast of iron.

The Doctor's only chance of rescuing the ship's four thousand passengers is to save Kazran's soul and show him that life is worth living. For this he needs to go back, way back, to when Kazran was a boy with a life full of promise. But can the Doctor put a song in Kazran's heart and love in his life, in time for Christmas? Can he bring him out of the dark?

DVD
In Your Honor, released on DVD 31st May 2021 from Paramount Home Entertainment, Bryan Cranston stars as a New Orleans judge who is forced to confront his own deepest convictions when his son is ... END_OF_DOCUMENT_TOKEN_TO_BE_REPLACED
Top PicksView

DVDBDUHD
17/09/2021
Ryan Reynolds stars in this action-packed comedy as a bank teller who discovers he is actually a background player in an open world video game in Free Guy, arriving on DVD, Blu-ray and 4K UHD 4th ...