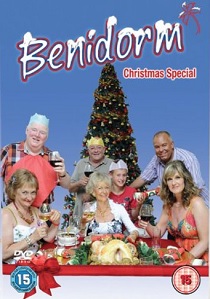 Set in the all-inclusive Solana resort, the hilarious Benidorm: Christmas Special will be released on DVD on 10th January 2011.

It's Christmas on the Costa Blanca and where better to spend it than in Benidorm with some of The Solana's best loved regulars and some very special guests, including the outrageous Louie Spence and the hilarious Su Pollard.

The Garveys (Steve Pemberton, Siobhan Finneran and Oliver Stokes) are back to spend Christmas with Mel and Madge (Sheila Reid) in their luxury hilltop villa but will Mel make it back from his business trip to Marrakech in time for Christmas dinner?

Noreen (Elsie Kelly) has found herself a travel companion in the form of Clive (Brian Murphy), an old army friend of her husband, but as the holiday progresses it appears he might not be quite all he seems. There's also confusion at The Solana, when Donald and Jaqueline (Kenny Ireland and Janine Duvitsky) check in with a group of "close personal friends" including king of the swingers, Marvin (Louie Spence).

With Mel stuck in Marrakech, Madge is left in charge of the Christmas Spectacular at the Benidorm Palace and when the star of the show, Su Pollard takes an unexpected detour via a Spanish nudist camp, it looks like the show will be left without it's big finish.

Luck comes in the unlikely form of Donald and Jaqueline who just happen to have a famous friend in the area who they hope to convince to step in at the last minute and save the show.

The Benidorm Christmas Special is produced by Tiger Aspect Productions, written by Derren Litten (the main writer and creator of many of the characters in The Catherine Tate Show), and stars Siobhan Finneran, Steve Pemberton, Sheila Reid, Janine Duvitski, Kenny Ireland and introduces Louie Spence and Su Pollard.

BD
A notorious criminal must break an evil curse in order to rescue an abducted girl who has mysteriously disappeared in Prisoners Of The Ghostland, released on DVD and Blu-ray 15th November 2021 from Elysian Film Group. END_OF_DOCUMENT_TOKEN_TO_BE_REPLACED
Top PicksView