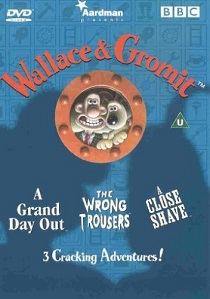 ReviewAnimationComedy
Review Article Go back to homepage
The all three of the animated adventures of Wallace and his pet dog Gromit.
Wallace, Gromit
Animation, Comedy
2
1 Hour 36 Minutes
Thank you for supporting DVD365.net when you order using the link(s) below.
Buy DVD
Story

Before the highly successful Chicken Run came along there was Wallace and Gromit. These remarkable clay models gave Nick Park and Aardman animation three Oscars for their efforts, and it all started thanks to the good old BBC. Their three adventures are presented on a BBC worldwide DVD and are as follows:-

A Grand Day Out

One quiet afternoon, Wallace suddenly finds himself out of cheese. Searching for a supply of cheese, the pair fly a home-made rocket to the Moon because, as everyone knows, the Moon is made of cheese.

Running low on money Wallace decides to get a lodger to help pay the bills. However, when the mysterious new lodger hijacks Wallace's new techno-trousers for use in a diamond robbery, it is left to Gromit to save the day.

There's a wool shortage and a sheep rustler is on the loose. Only Wallace, with his wacky inventions, and his ever faithful dog Gromit can save the day against a most unlikely criminal mastermind.

The picture quality on all of the episodes can only be classed as average, although the picture quality does improve with each episode as the video stock becomes newer and cleaner. It has an average bit-rate, with no real problems with artifacting, and the colours are rich and bright enough to give it the edge over the video versions.

The sound is only in stereo, but for what is basically made for television material you couldn't have really expected anything else. The dialogue is clear enough and there's a reasonable amount of use of the stereo channels, although it is nothing to write home about.

The extras are reasonable enough, although the photo gallery is a bit lame as it just contains stills from the various episodes. There's an interesting interview with Nick Park and some amusing Christmas idents from BBC2 - which are basically fillers before a programme commences. For such short clips it is a pity you can't just view these in one go rather than having to select each one in turn. Oh well, you can't have everything.

However, you should not be worried with either the picture or sound on this disc. These three episodes are true animation classics which have attracted a world wide following, and merchandising payday for Aardman animation. It is the value and convenience of this disc which makes it a must purchase.