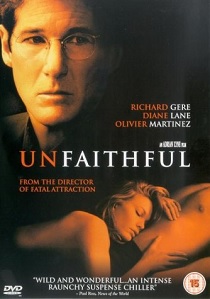 ReviewDramaRomanceThriller
Review Article Go back to homepage
Connie Sumner has a husband who loves her dearly, a young son she is proud of and a beautiful home in the suburbs, but she wants more...
Diane Lane, Richard Gere, Erik Per Sullivan, Olivier Martinez, Chad Lowe, Dominic Chianese, Kate Burton, Margaret Colin, Zeljko Ivanek, Gary Basaraba
Suspense/Thriller, Romance, Drama
2
1 Hour 48 Minutes
Thank you for supporting DVD365.net when you order using the link(s) below.
Buy DVD
Story

Connie Summer has a life most women envy. Her husband, Edward, is a rich and successful businessman with his own company, the couple have a blossoming young son and she runs their large and luxurious house like clockwork. Although she doesn't yet know it, there is still something missing from Connies apparent unfulfilled life.

Whilst on one of her many errands into the city, Connie is caught up in a particularly windy storm and she finds it hard to keep her balance as the wind buffets her down the streets. But when she literally bumps into Paul Martel, a seductive book dealer, she triggers a chain of events that will change her family life forever.

Intrigued by this handsome young man she reluctantly accepts his invitation back to his apartment in order to clean herself up. But something has stirred in Connie and she reluctantly gives in to her deepest desires and fantasies and a torrid affair ensues. Connie is soon making more and more trips into the city and her passion is quickly turning into an obsession that is attracting the eye of her husband who suspects all is not well.

When Edward hires a private detective to follow her every move he becomes devastated when the detective discloses the awful truth about his wife. Engulfed by anger he decides to confront this adulterer and put a stop to the affair. But with feelings running high he may have just gone an done something he may regret.

The picture is bright and colourful with a high level of detail throughout. The dark and gloomy interior and exterior scenes are handled with ease, and with a high bit-rate through out the film there are no real signs of any artifacting or outlining. The print also appears to clean and free from any picture imperfections or dust specks.

The sound manages a good around performance with some clear and precise dialogue and useful ambient effects in the surround channels, especially during the initial scenes where Connie bumps into Paul during the gale. With a film of this genre you shouldn't be expecting a sound effects laden film, but given the nature of this film it all certainly adds to the films sexual tension.

What tips this disc over from being a mediocre presentation into something special are the extras. Twentieth Century Fox has really gone to town with some outstanding extras, with the director's commentary coming in for particular praise. The Commentary is honest, insightful and most importantly extremely interesting from start to finish. Even the actors pick up the microphone for a chat, although you won't hear anything from Gere and the commentaries are only scene specific - essentially the more steamy ones.

Also included in the package is an Alternate Ending, which in my opinion was the better ending of the two, a good Interview Featurette and eleven Deleted Scenes - again with optional, and interesting, commentaries. There's also a set of Directors Script Notes and its all rounded off with the usual Theatrical Trailer and an Easter egg hunt.

From the disappointment of Killing Me Softly, I was wondering just what I was letting myself in for when the review disc dropped on my door mat. Fortunately, director Adrain Lyne knows his job and he manages to keep the audience interested, even if the films conclusion is a little on the poor side. And let's not forget, with films such as 9½ weeks, Fatal Attraction and Indecent Proposal under his belt, Lyne certainly knows how to create a scene to make your glasses steam up.

Based on the French film La Femme Infidele, Hollywood has finally shown that in the right hands a story of lust, love and murder needn't turn into a cheesy late night show on Channel five. Unfaithful is a clever and involving thriller which contains some superb acting - especially from Diane Lane who received an Oscar nomination for her efforts, and is brilliantly directed by Adrian Lyne. It is a film which is sure to do Diane Lane's career no harm at all and is highly recommended.