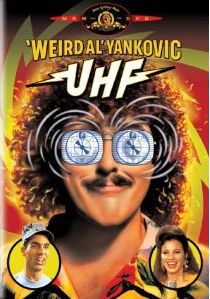 George Newman is a day dreamer whose bizarre imagination causes him to be fired from each and every one of his jobs. His latest job at a burger bar has also just been terminated after the customers were none to impressed with his overcooked fries and burgers whilst his imagination ran wild. His Uncle Harvey likes a bit of a gamble and when he wins a television station, Channel 62, his Aunt hounds him into giving George the job of running the station. Harvey isn't too impressed with his under performing nephew, but since the station is on the verge of bankruptcy it shouldn't be too much of a problem.

However, Harvey and local network Channel 8 hadn't banked on Georges over active imagination. With new shows such as the exciting game show "Wheel of Fish," where contestants win their own weight in fish, "Raul's Wild Kingdom", where poodles are taught to fly from third-story windows, and a janitor turned television presenter, the ratings soon begin to go skyward.

As the channel begins to take advertising revenue from Channel 8, George has to take on the wrath of channel 8's head, R.J. Fletcher. When some of Harvey's bets don't work out, leaving him short of money, Fletcher approaches Harvey with plans to buy the station and turn it into a car park. There's only one thing for it, George must raise the $75,000 his Uncle wants for the station. And what better way to raise money for the station by holding a television marathon?

For the age of the film the picture is surprisingly free from imperfections and dust scratches. They must have either used Al's copy or spent some money tidying up the film stock. Although there can be a little too much contrast at times with certain scenes with a distinct lack of colours. Never-the-less the picture is in good shape with no signs of artifacting or outlining and an average bit-rate throughout

Again, on the limited production budget that only just stretches to spatulas (watch the film!) there isn't going to be too much to challenge your surround sound setup. However, it is reasonable enough with clear and precise dialogue in the centre channel and the occasional use of the surround channels. The musical score is especially good with the parody of Dire Straits "Money for Nothing" being particularly impressive.

The menu is wonderfully animated and scored with some great additional footage especially created by Al for the DVD. Without spoiling it too much, you should definitely keep selecting the extras listed as being on the flip side of the disc. It must be one of funniest menu systems on DVD and Al is certainly embracing the technology.

Most of the extras are on the reverse side including a great Deleted Scenes section with introductions with Al plus a great Audio Commentary with Al and director Jay Levey. Al never seems to shut his mouth with his incessant chattering and interesting information on how the minuscule budget was spent.

Before those wacky Bill and Ted and Wayne's World films along came 'Weird Al' Yankovic. Some people may remember him from his many wonderful parody videos but this is his first, and only, time he ventured into film making with his weird Saturday Night Live ideas and slap stick comedy. Although it bombed at the cinema, fans of Al will love it, and after a few beers the daft humor becomes even more side splitting.

This is almost in the stable of Kentucky Fried Movie and Amazon Women on the Moon. If you want to take a gamble on a comedy then you should definitely take a crack at this film, you'll be surprised with the results. Even if Al's hair is just awful.