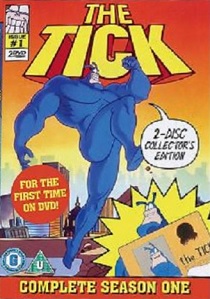 The Tick: Complete Season One

Review Article Go back to homepage
Attention evil-doers! The Tick is here, and he is wearing the blue tights of justice! Together with this trusty moth-costumed sidekick Arthur, Tick keeps the streets safe from a rogue's gallery of hilariously malevolent villains. This is the first season of their adventures - thirteen episodes in total.
Townsend Coleman, Rob Paulsen / Mickey Dolenz, Cam Clarke, Jess Harnell, Kay Lenz
Television, Animation, Action/Adventure, Comedy, Crime
All
5 Hours 35 Minutes
Buy DVD
Story

The Tick is a square jawed, muscular, bright blue crime-fighting superhero - with antennae sticking up from his head! His one mission in life - fighting crime in a place simply called The City, and he doesn't even suck blood. An absurd spoof of the classic superhero (and quite possibly copied by some more recent cartoons and CGI animated films), The Tick is high spirited, frequently obtuse, and prone to quipping odd, dim remarks alongside inspirational speeches. It all sounds like your classic superhero cartoon of the 1960's.

His superpowers include Nigh-invulnerability - which allows him to crash and bang without injury, Super strength - he can bend a steal girder with ease and Drama-power- where The Tick's powers increase as the situation becomes more dramatic. The Tick, like every superhero worth his salt, has a trusty sidekick who goes by the name of Arthur. Arthur is the brains behind the action, as well as acting as a conscience to The Tick's impulsive actions. He is also a moth. Together they keep the streets of The City safe from a rogue's gallery of malevolent villains of all shapes and sizes.

Low budgets and children's entertainment usually end up with the same result - poor quality images and some dodgy animation. In a way, the quality of the images here do disappoint, especially since the series is not really that old. However, that all important budget will always play heavily on the image quality and whatever masters are used for duplication purposes. Originally broadcast on television, it was never going to be anything special and expecting a widescreen presentation would have been a little too much to expect. Whilst there's a plentiful supply of colours on show, it all looks rather messy with picture imperfections galore, dust scratches and the occasional problem with pixelisation. Cult television or not, this is no Hollywood blockbuster or mainstream television series.

Like the picture transfer, the Dolby Digital 2.0 stereo 192 Kbps soundtrack is nothing special. Given that it's all dialogue, with the occasional strange sound effect and dramatic score, the two-channel soundtrack isn't really tested too much. The dialogue is audible - if a little muffled at times - and there's very little use of the stereo channels. It's sufficient without being particularly exciting - but, like the picture transfer, it's all relative to the budget and source material. For some odd reason, the soundtrack (and images for that matter) kept on reminding me of the cartoons of old - such as Batfink and Roger Ramjet. Like The Tick, they were cheap and straight to the point too.

After the long winded introduction, with an inescapable trailer for other Jetix products than can be seen on Saturday morning television, we're presented with the impressively animated and scored menu system. Laid out like a comic book, and with transition effects between the menu, the episodes on each of the two discs can either be played in one go or individually. Extras wise, it looks like some evil villain has made off with them all as there's nothing to be found here. There's not even any subtitles for the hard of hearing. Not much to talk about here then.

If you like your cartoons wacky with even wackier characters then, oddly enough, you wouldn't be alone in that department as there's a massive following for The Tick. And if that's the case then you're sure to enjoy this rather bizarre series. Well thought out and pleasantly presented, the complete series one is spread across two discs. It certainly looks impressive, but the fans who successfully launched an internet petition to get the series released on DVD may feel a little disappointed by the complete lack of extras - and not even that clever menu can make up for that. Still, at least has an inner sleeve - such a rarity these days.

Whilst bowing to popular demand is always commendable, the thought of making a quick buck on the back of it is not. Unfortunately, this release of The Tick looks like the later and when compared against other cult followings such as Family Guy this set does feel a little short changed. Never the less, I appreciate there's always going to be a risk and a much smaller budget for a title such as this so, extras or not, hard core fans are still going to be happy that this series has finally been released on DVD. However, whether the casual viewer will want to part with their hard earned cash for this set is too hard to call as, I for one, was thoroughly confused by it all - even if it was all rather funny.

UHD
Released on DVD, Blu-ray and 4K UHD 16th September 2019 from Lionsgate Home Entertainment, super-assassin John Wick is back and on the run after killing a member of the international assassin's guild ... END_OF_DOCUMENT_TOKEN_TO_BE_REPLACED
Latest ReviewsView