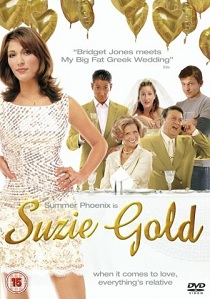 Suzie Gold comes from a traditional Jewish family which is firmly entrenched in the Jewish community and its values and she is under heavy pressure not to marry outside of her faith. Her younger sister Sophie is already due to tie the knot with a nice Jewish boy and hopes are high that Suzie will quickly follow suit. And when the handsome, and extremely wealthy, Anthony Silver asks her out on a date, Suzie finally feels her love life is falling into place.

However, the date is a bit of a disappointment and Suzie realises that Anthony may not be the one for her after all. Instead, she finds herself falling for Darren, a television researcher at her TV production job. The only problem is that Darren isn't Jewish so the pair begin a secret romance away from the ever nosey Gold family. However, after several months Darren isn't impressed that Suzie still can't admit to her parents that she's dating him, and he issues her with an ultimatum. But with a family crisis taking priority Darren takes it as rejection and moves on.

As the plans for Sophie's wedding go into overdrive, Suzie must decide whether she should do as her family expect and marry the handsome, but unloved, Anthony or follow her heart and rekindle her relationship with Darren. Nobody said life was going to be easy, but Suzie has come crashing into that point in her life where she really needs to decide what she wants out of it.

The picture is bright and colourful with some rich colour and flesh tones. However, things are not perfect as the picture has the occasional problem with outlining and edge enhancements. Fortunately, it is not a continual problem and it only occurs when large amounts of red are present on screen. Being a recent film the picture transfer is first-rate with few problems with dust scratches and other picture imperfections whist grain is kept to a minimum. Not a bad effort for a low budget production.

Although made on a tight budget the 448Kbps Dolby Digital 5.1 soundtrack is surprisingly effective with a good balance between the dialogue and musical score. However, things can be a little muffled at times resulting in it becoming a bit of a problem picking out the various accents and Jewish words. In fact, at one point I had to resort to the subtitles, and even then I still didn't understand what they were carrying on about. There is the sporadic use of the surround channels, mainly by the excellent musical score, whilst the same musical score provides some occasional action for the subwoofer.

The menu system is scored and animated with clip scenes from the film. It's not very imaginative, but it's sufficient for its needs with easily accessible and visible menu options. Extras wise, things are rather disappointing with only a Theatrical Trailer and Television Spots. It's hardly ground breaking material, but even with a minuscule budget it doesn't take much for someone to point a video camera at the director during production. After all, with the DVD sell through market being an important part of any films monetary life cycle, added value is extremely important. A definite missed opportunity here.

When the preview copy of Suzie Gold appeared on my doorstep I wondered what I was getting myself into. First off, I've never heard of it (let alone seen it advertised in cinemas) and after discovering it was based around a Jewish family and their traditions I feared the worse. However, I needn't have worried as, thanks to the handy voice over explanations from Suzie, everything was easily understandable to anyone not of the Jewish faith.

It also doesn't take long to see the many similarities between Bridget Jones' Diary and My Big Fat Greek Wedding. In fact, the promotional material which accompanied the preview disc mentioned the very same thing. As a result, fans of these two films and the romance genre in general are sure to enjoy this very British, and Jewish, take on the theme of love and marriage. It even manages to offer an interesting insight into the various Jewish traditions.

Whilst Suzie Gold is sure to attract the usual female audience the fact that Summer Phoenix, who plays Suzie Gold, is so attractive that even the most fidgety and grumbling of blokes will be more than happy to sit and watch. Trouble is, as with most romantic films, from the moment the film starts it's all rather predictable. Never the less, it still manages to come across as quite original, rather funny (and probably more so to a Jewish person), heart warming and, most importantly, extremely enjoyable from start to finish. As a result it's definitely a film worth considering, even if you're a bloke.