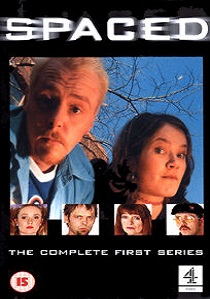 When Daisy, an enthusiastic but directionless writer, and Tim, a grumpy and recently dumped skateboarder, meet in a cafe their worlds could not be further apart. However, when Daisy spots an advertisement in a local paper for a flat for rent to a professional couple they pretend to be a couple in order to secure the tenancy.

Together with their bizarre friends, and equally weird and wonderful flat dweller Brian, you enter a world far more bizarre than you could ever imagine. If you thought Tim and Daisy were weird, just wait until you meet Tim's friend Mike, Daisy's friend Twist and landlady Marsha.

Unfortunately, I was expecting a picture quality far exceeding what has been produced for this DVD. After viewing the original television series on both terrestrial and digital channels the DVD, and no doubt video, is extremely disappointing. Although the bit-rate is above average and doesn't exhibit any of the annoying artifacting or outlining, the picture is devoid of colour and is far to washed out.

Because it is a standard television sitcom I wasn't expecting anything in the sound department. All that is provided is the standard stereo soundtrack as broadcast on Channel Four and their new digital service E4. The dialogue is clear and precise and other than that there's nothing of any note to report.

However, this is where the many disappointments end. When a television series on DVD includes Deleted Scenes, Trailers, Outtakes and Audio Commentaries you have to keep pinching yourself to believe its true. Ok, the trailers are just the teasers for the show on Channel Four, but the outtakes and audio commentary from the entire cast are just hilarious. They've even managed to put chapters in each of the episodes.

Spaced is a very unusual British sitcom, unusual in the fact that its bloody funny! It is without a doubt one of the most original comedy programmes ever made and is a credit to Channel Four television. Not only have they introduced the British to some of the most popular programmes on the planet, such as Friends and Frasier, but they have the hindsight to fund some of the most exciting British talent in years.

If you have never seen Spaced then you are really missing out. Forget The Simpsons. Forget Friends, get Spaced!