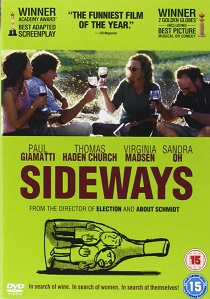 Based on the novel of the same name by Rex Rickett, the story follows the exploits of two old friends as they take a road trip around the wine region of Northern California. Miles, an unhappy and struggling writer teaching English to 8th graders with more than a passing interest in wine tasting, and Jack, an upbeat, womanising, once hot actor. Neither of them are getting any younger. To celebrate the last week of freedom for Jack, Miles being the best man, arranges a trip to the vineyards of the Santa Ynez Valley, which for Jack is filled with old haunts and familiar faces from happier times with his now ex wife.

The mismatched pair soon realise that they have different ideas on what they want out of their trip. Miles is keen to sample the good wine, play a little golf, eat well and enjoy the beautiful surroundings of the Santa Ynez Valley. Jack, by complete contrast wants to get laid. An activity he suggests Miles should also undertake. Miles is not overly thrilled at Jack's idea as he is still smarting from his divorce of two years ago. It doesn't take Jack long to hook up with Stephanie, an employee at one of the wine tasting and the pair quickly start a passionate relationship. In the meantime, Miles is drawn to Maya, a waitress who shares his love and knowledge of wine. Maya is also divorced and the two edge closer to the beginnings of a romance.

You know it isn't going to be all clear sailing as it would make for a rather dull film. Miles conscience is still plagued with thoughts of his ex-wife resulting in post wine phone calls ('drink and dial' as Jack puts it) and moments of losing his grip on the situation. Best observed at a wine tasting, where after a less than positive phone call to the literary agent handling his novel, results in a rather embarrassing scene involving the communal spit bucket. Jack, speaks of doubts over his impending wedding and the meeting of Stephanie can only mean trouble. It does.

A suggestion by Maya to attend a Bordeaux tasting the coming weekend is rejected by Miles when he inadvertently drops Jack and also himself in it by letting slip they had to be back on the Friday for the rehearsal dinner. "Who's getting married?" asks Maya, and so begins the downward spiral of both relationships, resulting in Jacks nose being broken by the motorbike helmet wielding Stephanie. This leads to one of my favourite scenes where Miles and Jack - post A & E visit - are sat in the Motels hot tub and Jack is trying to figure out where the truth about him could have come from, while Miles sits just across from him looking very uncomfortable indeed.

On their last night in the restaurant, with Jack in full nose bandage, he turns on the charm to a rather plain waitress who half recognises him. Jack being Jack helps her out and ends up going back to her place much to the dismay of Miles. It is early in the morning and Miles is awoken by a naked Jack knocking at the door having had to leg it upon the unexpected arrival of the waitresses husband. Cue another great scene as the shaken and shivering Jack recounts his journey back to the motel via an Ostrich Farm. If that was not bad enough he tells Miles they have to go back as he has left his wallet back there, containing the irreplaceable wedding rings. Will Miles come through for his friend despite his misgivings? Of course he does and we are treated to the comical sight of an overweight naked bloke chasing their car down the road.

Given that the film is on Twentieth Century Fox's independent Searchlight label you have to suspect that the picture quality is going to lower down the priority list then bigger budget releases. And in a way this is true with Sideways as it presents a rather soft and grainy image. Still, the picture is bright and colourful with a good level of detail and reasonable black levels. Certain scenes offer better images than others, with the darker and nighttime scenes occasionally struggling to cope, whilst the transfer is clean and free from excessive amounts of print damage and dust scratches.

With no requirements for explosions and masses of CGI, the 448 Kbps Dolby Digital 5.1 soundtrack more than satisfies it needs. With some clear and precise dialogue in the centre channel, plus some good spatial effects, it's an easy listening film with the catchy jazz based soundtrack providing most of the activity in the surround channels along with the occasional ambient effect. It's nothing spectacular, but it doesn't need to be anything else.

Before we even get to the menu system there are nine minutes worth of trailers for some classic films in Twentieth Century Fox's back catalogue plus others for Arrested Development, House Of Flying Daggers and Kinsey to wade through. Thankfully you can skip through them or get straight to the jazzy and rather jolly scored, but static, menu system via the 'Menu' button on the remote. Extras wise, things are interesting enough, but if a little thin on the ground.

The main extras is the Audio Commentary from actors Paul Giamatti and Thomas Hayden Church. It's always great to hear an audio track which isn't simply made up of the director or writers praising the various cast members and the pair get along like a house on fire with much mirth and merriment. However, whilst the thought of these two actors providing a commentary is an exciting prospect it is ultimately rather disappointing. There's far too much laugher and banter going on with far too little discernable facts about the film. Sure, the information is in there, such as the pair getting food poisoning early during filming, but it becomes rather hard to extract and eventually gets a little too hard going. Perhaps some input and prompting from the director would have been worth the while after all. Alternatively, if you'd rather watch the film and not hear the two actors chattering away then you can also view the commentary as a subtitle track.

The six minute Behind The Scenes Featurette is a little short but maybe of some interest to the virgin viewer with little or no knowledge about the film. With plenty of film clips, plus behind-the-scenes footage and interviews with the cast and director, it contains the usual back slapping interviews and comments about how everyone had such a great time filming. It's all standard, but rather lightweight, stuff.

Next up are sixteen minutes worth of Deleted Scenes with notes from the director. With seven scenes in total they can either be individually selected or played at once. Whilst I would have preferred a proper introduction, or even audio commentary, Alexander Payne provides a text based introduction then a number of notes on why they were cut for the film. It all looks slightly rushed, although some information is better than none. There is also Inside Look, an exclusive insiders look at upcoming projects from Twentieth Century Fox. This is a total let down as it is merely a trailer for Kingdom of Heaven and is hardly worth mentioning. Definitely a bit of filler material. There's also three Easter Eggs to hunt down.

This is a film about people rather than all out action so it is going to be a little slower in pace. It does start off quite slow but builds gradually. I really enjoyed this film, Giamatti and Hayden Church played their respective roles very well, with some great comic moments, including Jacks attempt at engineering a plausible explanation for his facial injury and the heart to heart Miles has with Jack about his life and how he poetically sums it up are amongst my favourites.

Sideways will certainly not do the tourist trade of the region any harm at all. The scenery is really beautiful and I wouldn't mind taking a trip there myself. So grab a bottle of your favourite wine - but please, NO Merlot - and sit back in the company of Miles and Jack against the luscious backdrop of the Northern Californian wine regions. Cheers!