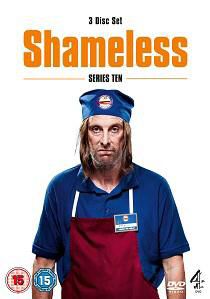 The unthinkable has happened - the Department of Work and Pensions have finally caught up with job dodger Frank. Faced with losing his benefits, he finds himself in a nightmare fantasy on death row, he's a 'dead man walking' to... a job!

However, unbelievably, Frank has discovered that work does indeed pay and he's thriving in his new job at World of Burgers - with his newly discovered enthuasim and laid-back approach winning the respect of his fellow employees and helping to increase the sales figures. However, Frank's new boss Wesley has got it in for him and hatches a plan to get rid of the reformed Chatsworth Estate scrounger in order to achieve his longed-for promotion.

Meanwhile fellow Chatsworth Buccaneers are up to their usual dodgy tricks. Shane and Jackson launch a bootleg booze scam; Avril uses her new job in a pharmacy to become the local supplier of prescription drugs; Aiden and Chesney get stuck with a live cow; a guilt-ridden Shane starts stalking the family of the man he's killed and desperate Gloria turns to Dom when she gets into trouble with a loan company.

New relationships form and existing ones are tested as Marty pledges to rescue a Brazilian housemaid from her life of servitude, then plucks up the courage to propose to Kelly, only to find his big moment trumped by a letter from his kids in Spain. There's an alarming lack of action between the sheets for Billy and Mimi; the pressure's on for Letitia to lose her V plates, Gloria begins another scandalous affair and Avril and Jackson's relationship heads for the rocks. And it all climaxes in death, murder, incest and kidnapping.

As a series broadcast on Channel 4 there was never going to be anything special about the picture quality. However, there's the sell-thru market to consider, plus the all important export market - assuming people will understand both the accents and the humour! So, with the merchandising and the all important bottom line, plus Shameless continuing to be one of Channel 4's biggest ever money spinners, it means that there's some money to be spent on the production - and it all shows here. Still, bigger production budget or not, Channel 4 always has a knack of delivering the goods when it comes to home grown material - and it shows here.

The picture is bright and colourful with a high level of detail throughout. The interior scenes are well lit and the grubby pub and the various unkempt houses look unpleasant enough to help keep you away from them for life. Even the outside scenes, which is on a purpose built set (apart from when they manage to venture into deepest Wythenshaw), look superb and equally depressing - with no problems with pixelisation or outlining. Also, given that this is a television series, you'd also expect nothing to report regarding problems with print damage. When compared against some of the bigger American productions, with their near unlimited budgets, it's yet another cracking result for this ground-breaking series.

The Dolby Digital 2.0 channel 192 Kbps soundtrack was exactly as I'd expected from a television series and there is no real need to do anything spectacular with the audio. Still, you can't complain too much as the series doesn't really call for anything too dramatic and involving. Instead, we have some clear and audible dialogue (which, with Frank Gallagher's slurred speech, is needed at times!) and it's all accompanied by a good musical score. It simply does what it needs to do - and it handles it all with ease.

The main and submenus across each of the three discs are simply, but pleasantly, animated with various cut scenes from the series playing in the background of the programme logo accompanied by the theme tune. The episodes may also be played in one go or individually selected from a separate menu. Each episode is also available with English Subtitles along with an optional Audio Descriptive track.

Unfortunately, fans are going to be fairly disappointed with this three disc set as there are no extras. When you're paying a fair chunk of money for a boxset such as this then it's a disappointment not to have any additional features. After all, it's not as if the Chatsworth estate is without any history - or interest. Even Channel 4's official website has some interactive elements to it - surely they could have found the time, budget and effort to do something here too. A rushed release perhaps?

Channel 4 seem to have the remarkable knack of discovering talented writers, in this instance Paul Abbott, and producing some of the country’s best known comedy/dramas with programmes such as Teachers and even Peep Show springing to mind. However, it is Shameless that takes all the accolades as Channel 4's most successful drama comedy ever. Even the Americans have taken it to heart and come up with their own version - but, naturally, it's based on a dysfunctional American family instead.

It's no wonder the production company paid a fortune for a purpose built set and studio in the deepest and darkest depths of Wythenshawe - pretty handy when the real locals kept helping themselves to the production crew's belongings or interrupting filming. My office use to be next door to the set and it was interesting to see the various comings-and-goings along with being held up whilst the exit from the car park was blocked by various arc-lights and production crew. I never did get that extras role...

Packed with sex, drugs, gratuitous violence, ASBOs, love, ridiculous scams and plenty of strong language, it's not hard to see why it has such a cult following. Fans of the series are surely going to be purchasing this boxset to go with their others in the series, but with a lack of extras, it does take the edge of this release. Let's just hope that the next, and final, series throws out all the stops and provides something that will reward the fans for their dedication and following.