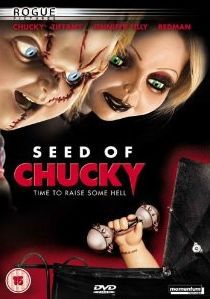 ReviewComedyHorrorCrime
Review Article Go back to homepage
Chucky and Tiffany are back from the dead, but this time there's an orphaned doll called Glen to join the time. But this time, Chucky wants some flesh and blood offspring to carry on the family tradition. Let the slaughtering begin!
Jennifer Tilly, Brad Dourif, Billy Boyd, Redman, Hannah Spearritt, John Waters, Keith-Lee Castle, Steve Lawton, Tony Gardner
Comedy, Crime, Horror
2
1 Hour 22 Minutes
Thank you for supporting DVD365.net when you order using the link(s) below.
Buy DVD
Story

Glen is a special kind of orphan. He's a rather grotesque doll that suffers from terrible nightmares filled with hate, blood and guts. But as you've probably already guessed by now, Glen is no ordinary doll. After being discovered in a mysterious graveyard in America some six years ago, his master Psychs has christened him Shitface and is making a very tidy living indeed out of his none existence ventriloquist skills. But Glen is also confused as to who he really is. He knows he's made in Japan, after all it's stamped on his wrist, and he often thinks about his parents and whether they were Zen masters and served the Emperor.

When production starts on a new film about the urban legend that is Chucky and his bride, Glen manages to see some of the footage on a television. But what makes it all the more interesting for Glen is the sight of the "Made in Japan" mark stamped on Chucky's wrist. So, escaping from Psychs, Glen decides to post himself to Hollywood and bring his bloodthirsty parents back from the dead. However, his newly uncovered parents are far from perfect, and Glen is horrified to see them quickly embark on a new spree of murderous mayhem. Chucky also has trouble believing that his child doesn't want to follow in his footsteps, whilst the star-struck Tiffany can't believe that their movie will star her all time favourite actress - the one and only Jennifer Tilly. If only they could all swap bodies with a human and become one happy family. Now there's an idea...

Given the low budget, and the fact it was made in Rumania to save even more money, the picture is surprisingly bright, colourful and sharp throughout. With the majority of the shocks taking place at night there's huge scope for problems with artifacting or outlining, but on the whole it all stands up rather well and even manages to provide some good black levels too. Whilst there is a slight hint of grain, the transfer is clean and free from dust scratches and other forms of print damage and goes on to prove that you don't need a mega-budget Hollywood blockbuster to produce the goods in the picture department.

You often find the most obscure of films being accompanied by the most unexpected soundtracks. And in this case, Seed of Chucky is supplied by two rather dynamic 448 Kbps Dolby Digital and 768 Kbps DTS soundtracks. Still, given the relatively short running time it's the perfect opportunity to take up some of that slack space on the DVD. But what's makes this all the more exciting is the fact that both formats provide a rather good sound experience. Sure, it's basically down to the good old favourite weather effects of thunder and lightning, but it's surprisingly effective and adds some enjoyment to the film.

The dialogue is crisp and clear in the centre channel whilst there's a fair use of the surround channels throughout. The LFE channel gets a good work out during the more dramatic scenes whilst the stereo front channels are surprisingly quiet giving very little in the way of directional effects. Dialogue based films don't really expect too much from the stereo channels, but given the creepy nature of the film it's surprising to find these channels so quiet. Overall, with very little to go on, it's actually quite hard to pick one soundtrack above the other. Never the less, I always opt for the DTS soundtrack whenever possible.

The menu is animated and scored with the three dolls sat in front of a cinema screen of clips from the film. The extras contain the usual amount of filler and promotional guff, but the audio commentary more than makes up for the rest of the extras failings.

The main extra is the Commentary with Writer Director Don Mancini and Actress Jennifer Tilly. It's an interesting commentary with Mancini talking incessantly throughout with plenty of interjections from Tilly. The pair offer plenty of information on the animatronics, the general production issues in Rumania, funding and the fact that there's an awful lot of British actors in the film (again, for funding reasons for which the filmmakers even got a $2 million rebate!). Although the commentary is good, it would have been made all the better if Brad Dourif had been available to provide a commentary too, but Mancini explains that he was too busy filming. Mancini also gives the impression that other cast members were due to join in the commentary, but alas, this is not the case.

The Family Helliday Slideshow is a bit of pointless three minute feature. With the original cast members voicing the dolls we follow the demonic trio as they present a slide show from their travels around America. Whilst there's nothing particularly exciting about the pictures, keep your eyes peeled for some poor unfortunate soul in the background who has been dealt with by Chucky in a manner that only he knows. The nineteen minute featurette Conceiving The Seed Of Chucky is yet again populated with interviews with the dolls along with a more detailed, and useful, interview with Director/Writer Don Mancini, other production members and the principle cast members. It's an interesting watch, especially for the improvements in the animatronics, and how they went about the filming process in Rumania.

The four minute Fuzion feature is a typical, and rather uninteresting, television promo with the cast and dolls. The Jennifer Tillys Diary section is a bit bore with too much text to wade through. However, assuming that these are genuine extracts from her diary, the initial sections are interesting enough, even if it's just how to get into the mind of a Hollywood actress, her agent and all the back scratching that goes on behind the scenes before a person is finally cast in a film. Rounding things off is the ubiquitous of DVD fillers, the textual, but rather detailed, Cast and Filmmakers Biographies. It's a just a pity that there was no room, or inclination, to add the theatrical trailers for the films. Never the less, the extras match the tongue in cheek nature of the film and add some good value to what is already a rather good value title.

There's no doubting that tongue has been firmly planted in cheek here and actress Jennifer Tilly has to be congratulated for taking it all so well on the chin. With so many in jokes, and much poking of fun (usually at Julia Roberts expense) it's very hard to take the film seriously as a piece of terrifying horror. Mind you, in all of this euphoria and joking, the Seed of Chucky and it's previous Bride of Chucky can hardly be classed in the same family of horror films that was once labeled a video nasty and slated for supposedly influencing the death of a young child in Liverpool.

It's very hard to place Seed of Chucky in any particular genre pigeon hole as it's so wacky it sits somewhere between the horror and comedy genre. Unfortunately, these days Hollywood has completely lost the plot when it comes to horror films and it has to rely on remakes or jumping onboard foreign horror films, such as Night Watch, in order to provide their audience with their shocks. So it's a little odd that Chucky is such a fun film to watch and that fans of the franchise are such to lap it up for all the fun its worth. However, people new to this franchise may be a little confused by the goings on and if a scare is required then this film should be avoided. Still, if you fancy some laugh out cheesy fun from a film then you really can't go too far wrong here.