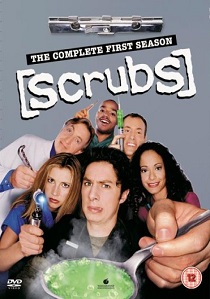 Scrubs is one of a multitude of current laugh-track-free sitcoms in America that are nothing short of genius. Scrubs itself, Arrested Development, Curb Your Enthusiasm and Malcolm In The Middle all lack those awful, patronising audience laughter and applause tracks, and they're all the better for it, though the ratings on occasion disagree, this being the last season for both Arrested Development and Malcolm In The Middle. Let's hope Scrubs dodges the bullet for a while longer though; five seasons is not enough for a sitcom of such a high standard.

The sitcom is largely based around the antics of J.D. (Zach Braff, affably nerdish narrator of the show and prone to Family Guy-esque random thoughts which often lead to an eccentric 'aside' gag), his best friend Turk (Donald Faison, African-American buddy and proud of it) and his on-again, off-again subject of affection, Elliot (Sarah Chalke, as self-conscious, compulsive and neurotic as they come), first year medical interns at Sacred Heart hospital. The 24 twenty-minute long episodes presented here see us through their first year as residents; with every new day come new hilarious situations.

Alongside these three we meet J.D.'s mentor, Dr. Perry Cox, as damaged a character one can possibly be and prone to lengthy humorous rants. He also always refers to J.D. by a girl's name, which get wilder and wilder as the season goes on. There's also Dr. Bob Kelso, grumpy old hospital manager; Carla Espinosa, Turk's Hispanic girlfriend; the Janitor, a strange character who seemingly hurts or insults J.D. at every turn; Ted, nervous hospital lawyer and lapdog of Kelso; the sex-obsessed Todd; and Perry's ex-girlfriend Jordan Sullivan, who is part of a pivotal plot point towards the end of the season (I won't give things away here!)

Episodes revolve around any number of mishaps around the hospital. Laughs come aplenty, and whilst mostly emanating from the random 'aside' gags (gags which are generally unrelated to the plot and emerge from a thought of J.D.'s), also come from wit, wordplay, facial expressions and (frequently) Dr. Cox's hilarious, adjective-filled rants. References to pop culture abound, popular music is frequently used (although some of this has been altered for the DVD due to monetary issues - though most of the songs that I noticed during original airings are present and correct) and the casting of the characters is nigh-on perfect - the ensemble are up there with the likes of Frasier and Friends when it comes to cast compatibility and camaraderie.

However, comedy isn't always the order of the day: in amongst the hilarity some really touching and moving moments emerge; and J.D.'s narration offers an interesting perspective on the events of the moment that ranges from hilarious to outright emotional. The shows do frequently end with something of a moral, but these are handled well and are never preachy. Characterisation and story play a large part in the series, more than can be said for many other current sitcoms. The show is filmed using a single camera, and action is always taking place - this is more E.R. or Curb Your Enthusiasm than Seinfeld or Friends.

Episodes this season see everything from the interns' first day, to J.D.'s first patient death, to the arrival of J.D.'s father and Jordan Sullivan's brother on the scene. There's not a dud in the lot, and while some work better than others ("My Old Lady" is a televisual masterpiece that little else can live up to) this remains an excellent collection.

Video quality on this release is acceptable; whilst not as sharp as you might expect for such a recent show, colours are fine and the NTSC-to-PAL conversion isn't as bad as it could have been. My only real issue was some grain here and there; I wouldn't expect that for such a recent show. The show is presented in 1.33:1, as originally aired.

Audio is fine; the DD2.0 track won't blow your mind but it's sufficient for dialogue-heavy sitcoms such as Scrubs. The sound effects and music used (such as the theme song) are rich and sharp is as good as one would hope for a 2.0 track. Audio is available in English, Italian and Spanish; French and German are listed on the menus but when selected the episode plays in English. Subtitles are available in ten European languages, including English for the hearing impaired, all of which except for the English are available on the extensive special features too (annoying they missed English out - bad news for the hearing impaired on that front!).

The menus are well-designed, look great and are easily navigable. The opening theme plays in the background on the main screen; on other screens, the closing theme plays. Strangely, Buena Vista have not included the episode name on the menus, simply numbering them, which is made even more confusing by some of the screenshots illustrating the episodes are pictured next to the wrong number. Thankfully, an insert with episode titles is included in the three-panel Digipack; one pane holding the flyer, the remaining two holding two discs overlapping - a space saver, if a bit annoying and unwieldy.

A wide array of bonus features have been packed into this set; aside from the commentaries, all are located on the final disc. Six Commentaries are present throughout the set, on "My First Day", "My Old Lady", "My Fifteen Minutes", "My Blind Date", "My Sacrificial Clam" and "My Hero". Series creator (and comedic genius) Bill Lawrence is present on all six, and is joined by cast members including Braff, Lloyd and McGinley. The commentaries are very interesting and entertaining, in equal measures, much like those on The Simpsons and Futurama sets. The banter between the participants proves how funny these people can be; their wit on the spot is on a very high par. I'm very pleased these were included as commentaries are among the best extras a set can feature.

Also included is a half-hour catch-all Documentary entitled Newbies, a fairly in-depth look at the cast, the writing and the set. All the cast are present and correct, and the informational titbits found here are of great interest. Next up is The Doctor Is In, a five-minute interview with Zach Braff about how he was cast as J.D. and what he thinks of the character. Not Just Another Medical Show offers us a look at the benefits of filming in a real hospital; and Favourite Moments lets us know about the cast's favourite first-season gags. Also present and correct are alternate takes and ideas for lines (Alternate Lines: A Second Opinion); Outtakes; a ten-minute reel of entertaining Deleted scenes; and the Music video for "Superman", the full version - slower and much longer - of the show's theme tune, performed by Lazlo Bane.

It should be obvious from my description that Scrubs won't appeal to everyone. It doesn't follow the traditional sitcom format; the jokes are occasionally risqué, frequently rely on knowledge of pop culture and are not generally one-line witticisms; and the characters are unlike those found in other, lesser sitcoms. But those that enjoy such humour will find solace in this excellently presented collection of 24 comedic gems.