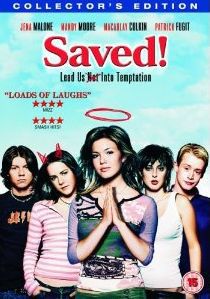 ReviewComedyDrama
Review Article Go back to homepage
Mary is a good Christian girl who goes to a good Christian school and has a good Christian boyfriend. But her life is about to be turned upside down when she discovers that her boyfriend may be gay, and in her attempts to save him, finds herself pregnant.
Jena Malone, Mandy Moore, Macaulay Culkin, Patrick Fugit, Heather Matarazzo, Eva Amurri, Chad Faust, Elizabeth Thai, Martin Donovan, Mary-Louise Parker, Kett Turton
Comedy, Drama
2, 4
1 Hour 28 Minutes
Thank you for supporting DVD365.net when you order using the link(s) below.
Buy DVD
Story

Mary and Hilary are best friends, members of the Christian Jewels, top of the class at the American Eagle Christian High School and these good Christian girls are worshipped by everyone. To be in their inner circle of friends is a privilege to behold. But the situation changes dramatically when, during an underwater confessions game, Mary's perfect boyfriend Dean confesses that he might be gay. Desperate to save him, after receiving a hefty bump on the head, Mary receives a visitation from Jesus who reliably informs her that she should sacrifice her virginity in order to keep Dean on the right path.

Ever the obedient girl Mary does just that, but it's too late for Dean as he is spirited away to Mercy House, a Christian treatment facility where they'll help him rid himself of this most unsociable of inflictions. Trouble is, in his absence, Mary finds herself pregnant and begging God for forgiveness. As an immaculate conception is ever so slightly too far-fetched for the American Eagle's religious followers, Mary's fervent faith in Jesus is seriously tested and she gradually finds herself cast out into the cold by the fanatical Hilary and her disciples who, disturbed at her sudden change in appearance and attitudes, think she's become possessed and attempt an exorcism on Mary.

As a new, and completely unexpected pariah, Mary is soon befriended by the school's other outcasts. This unlikely group, which includes drop out skater Patrick, Hilary's wheelchair bound brother Roland and Cassandra, the school's only ever Jewish pupil who's been expelled from just about every school in the state, come together to make it through to graduation and a shot at redemption. Trouble is, they've got to deal with Hilary and her gang of do-gooders who are going to stop at nothing in their attempts to discredit Mary and get her expelled. Who said that angels never loose their halos?

For a budget film, the picture is a bit of a cracker. Colours are bright, rich and textured and there's a excellent level of detail throughout. With the majority of the film taking place during the day, and sunny ones at that, the transfer is wonderfully clear with no problems with either artifacting or outlining whilst the night times scenes are as equally impressive. Never the less, even for such a recent film as this there is the occasional problem with dust scratches and other print damage. But since these are far and few between, plus the fact that the entire film was made on a budget of around $5 million dollars, with it's already remarkable results, this can be forgiven.

Given it's minuscule budget the musical score is amazing and just by watching the closing credits and its long line of music credits you're left to wonder at just how director Brian Dannelly managed to license so many songs without using up all of his budget. Sound wise, the Dolby Digital 5.1 448 Kbps soundtrack is than functional for a film of this genre. The dialogue heavy soundtrack with plenty of voiceovers is anchored firmly, and clearly, in the centre channel throughout whilst the front stereo channels offer some good spatial and stereo steerage. The only slight disappointment is the lack of real activity in the rear channels. Never the less, they aren't totally forgotten and the occasional ambient effect finds its way to rears.

The menu system is pleasantly animated with a few cut scenes from the film and scored with a nice and relaxing tune. The menu transitions are animated whilst, apart from the scene selection menu, the sub menus are a static and silent affairs. The main menu also contains an Easter egg.

Given the budget for the film the extras, and the effort made to provide them, is quite remarkable. First off there's two Audio Commentaries, one from principle actresses Mandy Moore and Jena Malone and another from director Brian Dannelly, producer Sandy Stern and co writer Michael Urban. Naturally, the commentary track from Brian and company is the far more interesting of the two. It contains plenty of background on the production and snippets of interesting information about the various filming techniques and items on the sets which were used as part of the films message. It's all rather interesting.

On the other side of the coin, if you like to hear giggles and comments on the various hair styles of the day then the Mandy Moore and Jena Malone commentary track is the one for you. But to give them fair dues, they do manage to provide the occasional bit of information about the production and its day to day filming, but it is hard work at times and it can become all rather tiresome after a while.

The rather criminally short four minute Heaven Help Us featurette goes behind the scenes of the film and, sandwiched between clips from the film, there's the occasional interview with the director and cast members who give their opinions and their characters and their interpretation of storyline in general. Again, it's something interesting to watch, but like far too many featurettes these days, it's way too short. Next up are the six Alternate, Deleted and Extended Scenes which run to a total length of around six minutes. The majority of the scenes are extended versions which were cut from the film in order to achieve a PG-13 whilst some of the scenes were quite correctly dropped from the film for pacing purposes.

If you missed or failed to pick out some of the handily disguised revelations, which was most likely done to get the PG-13 certificate they desired, then the six clips in the Saved Revelations reveal all. With cuts from the film including what's behind Roland's comic book to Veronica's dirty little secret, your original PG certificate would have been on dodgy ground indeed. Things are rounded off with a fairly poor Bloopers Reel and for good measure, the trusty old Theatrical Trailer. All in all, it's quite a good collection of extras and it all helps to make the overall package good value for money.

When the preview disc of Saved! dropped through my letterbox I hadn't a clue what to expect and when the press released mentioned "God" and "Christians" I thought I was going to have to endure some sort of religious film. And five minutes into the film it was starting to look remarkably like this was going to be the case. However, once things got going there was plenty of things to make the Pope, and the usual Christian masses who complain at every possibility, choke on their cornflakes.

But dig a little deeper and you'll soon discover that it is simply another teenage film which deals with all of their usual problems of pregnancy, sexuality and acceptance of others in a wonderfully daring way that is in no way an attempt to bash religion in a way that Dogma did so well. If anything, it will make you think about it. Still, without even seeing the film, the religious fanatics were slating Saved! from the off and completely missing it's pro-life stance and the ultimate goal of redemption. It even manages to be rather funny with some cracking one liner poking fun at just about everything and everyone.

Saved! is a film which is aimed squarely at a teenage audience and most other age groups may not be that impressed or perhaps even offended somewhat. But either way, the various actors put on a cracking show, with Macaulay Culkin being particularly impressive as the wheelchair bound Roland, whilst given it's extremely tight budget, Brian Dannelly's direction is simply brilliant. Even the extras, and especially the superb audio commentary from the director, producer and co-writer, add some excellent value to the package.

Whilst I am by no means a religious person, nor a teenager for that matter, I quite enjoyed Saved! I suspect many other thirty something's will too, and if you can manage to endure it's rather slow opening you should be rewarded with some cracking acting and an extremely clever storyline. It's a film well worth investigating.