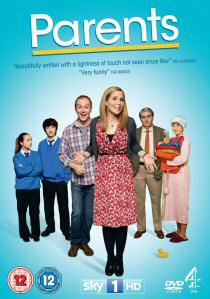 ReviewTV SeriesComedy
Review Article Go back to homepage
When Jenny Pope loses her job, house and savings after getting 'punchy' with a colleague, she and her family are forced to move back in with her parents Len and Alma. Three generations living under the same roof? This isn't going to be easy - and there's bound to be laughs.
Sally Phillips, Tom Conti, Susie Blake, Darren Strange, Jadie Rose Hobson, Christian Lees, Daisy Haggard, Grace McGee-Smith, Olivia McGee-Smith
Comedy, Television
2
2 Hours 12 Minutes
Buy DVD
Story

Parents. How needs them? Who'd want to be one? Flying the nest is a milestone moment, a mixture of nerves and delight as you free yourself from the parental wing and take off to the big wide world without looking back. Well, that's the idea anyway. But what if unforeseen circumstances force you to return and shack up with the bank and house of mum and dad once again?

Until recently, Jenny Pope was a high-flying executive living in a large house in a leafy and well respected area of West London. However, that has just come crashing to an end with the loss of her job. She says it was due to "structural changes" at the firm, but it was more likely to have come about thanks to a rather heated altercation, and roll about the floor of the work kitchen, with a work colleague. Things then went from bad to worse when, on the same day, Jenny discovers that her unemployed husband Nick had squandered their life savings on an ill-conceived business scheme.

If that wasn't bad enough, their house has just been repossessed and now she's had to move her husband, self-styled entrepreneur Nick and two teenage children, Sam and Becky, into her parents' - Len and Alma house in Kettering. Naturally, everybody hopes that it's all going to be on a temporary basis and Jenny is determined to climb back up the ladder and get back to her old life, no matter what it takes.

Naturally, three generations living under the same roof is never going to be ideal, but, beneath the spats and squabbles, the are some home truths to be uncovered. One, that your parents are never too old to completely, utterly annoy you. And two, that you're never too old to learn from them...

With undoubtedly some heavy budget restraints, there is very little to expect from the sound department. Even more so when you consider it's a sitcom. Still, the 192Kbps two channel Dolby Digital soundtrack is more than sufficient for its needs with the standout moments being the musical interludes from a vast range of pop music from over the years. The dialogue is crisp and clear and clearly audible at all times and, whilst it's not going to win awards for its sound quality, but it's the sort of soundtrack to be expected from a budget television series such as this.

Image quality wise, as a television series broadcast in the United Kingdom, Parents was never really going to set the world on fire. Lacking the budget of pretty much any American (or major British) production, even British soap-operas such as Eastenders or Coronation Street outrank it in the quality stakes. Never the less, with some reasonable colours and flesh tones, solid black levels and a good level of detail, it's all easy on the eye. Also, with the internet playing a bigger part in "on demand" and "catch up" television, it'll also good enough to go on-line without suffering from over compression.

The menu is a static, but scored with the sitcoms' rather annoying theme tune whilst the family members stand there gurning at you from a safe distance. A static submenu allows you to select an individual menu whilst there's a Play All option from the main menu. It has it all covered, except for the extras - there aren't any.

Ok, the lack of any sort of budget may have had an effect, but considering Sky sponsor a cycling team and throw billions of pounds at the Premiership football league, I'm sure a few quid could have been scraped together for some sort of half-decent production here – although I suspect it may have just been a simple "fire and forget" issue.

Given that the series was written by fresh British talent newcomer writers Lloyd Woolf and Joe Tucker, and stars a whole host of British "classics", you would have thought some sort of interviews would have been forthcoming. Perhaps they all just wanted to forget it all?

Given that the cast includes an impressive array of actors - there's Tom Conti in there for heaven's sake - you'd be expecting to be rolling around the sofa in hysterics. And with the show broadcast on Sky (which I don't have a subscription for - mainly due to there not being enough hours in the day to warrant it) I was eager to discover what all the fuss was about. But given that Sky haven't renewed for a second series, and my girlfriend was irritated by the theme music within the first twenty seconds, I was a little worried.

And those worries became all the more apparent during the first two episodes as I didn't find a single line funny. The remaining episodes were simply annoying. Whilst there's no doubt that Tom Conti steals every scene he's in, the characters are so clichéd and overdone in so many other series, Parents is woefully underwhelming. It simply doesn't know what it wants to be and, unfortunately, that's the problem with British sitcoms these days – we're still trying to catch up the American shows such as Friends and Frasier.

Whilst there have been a few gems – and they have been so far and few between them that I can only think of Coupling and Outnumbered – the likes of My Family, 2.4 Children and My Hero bring me out in the sweats as I remember just how bad they were. The golden era of the likes of Butterflies and The Good Life are long gone. It's a shame really, as the association with Channel Four usually means that it's going to be a cracker. Unfortunately, in this instance, the stark fact that Sky didn't commission a second series says it all. Heaven knows what Tom Conti's agent was thinking.