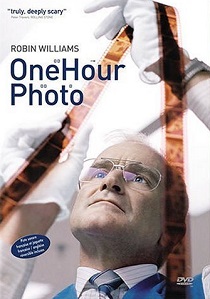 Seymour Parrish is a long serving photograph developer at a local supermarkets one-hour photo lab. He loves his job and takes great pride in his work, treating each picture as a work of art. Over the years he's seen them all. Each and every day he processes films varying from proud parents and their new offspring, birthday parties, anniversaries and even the occasional budding amateur pornography photographer. It's all in a days work for Sy and photography department in the local town's supermarket.

In particular, Sy is very fond of Yorkins family. They are the perfect suburban family and over the years they have being bringing their films to the supermarket to be developed. As a result Sy has been party to all of the family's happiest moments and witnessed the birth of their child and his subsequent growing up. However, Sy has a very dark and disturbing secret. All the time the family have been bring their films to the supermarket he has been making an additional copy of each of the films for himself. In fact, he has become so obsessed with the family that he believes that he is part of it, using it as an escape mechanism for his dull and lonely existence.

When another batch of films arrives he duly sets about processing them in his normal loving manner. However, when he discovers something disturbing in the photographs his illusion of the perfect family is totally destroyed. Maters and made worse for Sy when the manager calls him into the office and questions him about the unaccounted use of films and development fluids. Sy is finally pushed over the edge when the manager dismisses him from his beloved job and the once perfect family becomes the target for his psychosis.

The picture is bright and colourful with plenty of detail and a high bit-rate throughout the film. The scenes in the supermarket also contain a high level of contrast and neutral colouring in order to give Sy a plain look which makes him almost disappear unnoticed into the background. The picture is also free from any artifacting or outlining and there are no signs of any dust scratches or other picture imperfections. Mind you, for such a recent film I would not be expecting it to be any other way. However, the PAL region two edition does have the edge over its NTSC counterpart with the colour red looking particularly impressive.

Although this is not an action film, with the usual condiment of surround effects, it still a very effective and involving soundtrack. The musical score is used to good effect and the dialogue is clearly and easily audible in the centre channel without any cross channel bleeding. The surround channels are not neglected and they are used effectively throughout the film with some good ambient effects. All of the channels remain well balanced and once a comfortable listening level is obtained there is never a need to adjust it.

The menu is cleverly animated and scored with, unsurprisingly, a photography theme throughout all of the various submenus. Both the region one and two editions feature the same menu layout and design. The main menu shows a photography development process cut scene whilst the menu options are selected via a photograph development style envelope. The sub menus continue the theme with a number of cross fading pictures of Sy. It's all simple, but extremely effective, and a typically well thought out menu from Twentieth Century Fox.

The extras are the same on both the region one and two editions of the disc. They are also rather interesting and contain a first for Robin Williams. He has previously shunned providing an audio commentary, including actually watching his films, but this time around he feels so strongly about the film that he decided to hit the recording studio. Both he and director/writer Mark Romanek provide an extremely interesting insight into the film and Williams even manages to keep control of himself for the duration. This is definitely an amazing feat for this eternal comedian as during the relatively serious "The Charlie Rose Show" feature he is back to his madcap self and interrupting the interviewer with his trademark observations and impressions.

The film is told from back to front, and although Sy has been arrested for a crime he has committed you don't actually know what he has done to the Yorkins family. What did he do? Did he murder some or all of the family or was he caught in time? This is a superb idea for cranking up the suspense as you are left wondering, and dangling on the edge of your seat, just what he did right up to the final moments of the film.

Robin Williams' acting is simply awesome and his portrayal of the chronically lonely Sy must be his best ever performance. Not only is the acting top notch, but his mannerisms and expressions really do put across his abject isolation. Mind you, his performance is more than helped by the superb direction of Mark Romanek. With the films initial supermarket setting devoid of any real colouring Sy almost disappears unnoticed from the screen with his equally bland clothing and uniform. Sy is portrayed as a lonely man indeed.

This film certainly makes you stop and think about the people who you trust your memories and feelings with. Whenever you take a roll of film to the developers do you ever think of the process that creates your memories? Just who is looking at your holiday snaps and embarrassing or joyful moments? Do they laugh at your hair or the stupid gurning face you made whilst blowing out the birthday candles, and more worryingly, have they made a copy of that sexy snap of your girlfriend? All I'll say is, thank God for the instamatic and digital camera!