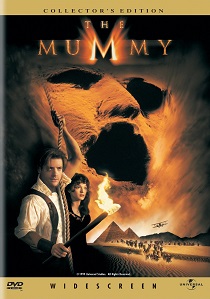 This big budget remake of the Boris Karloff 1932 original is a rollercoaster ride of shocks, special effects, bandages and Indiana Jones stunts. Rick O'Connell, played by Brendan Fraser, leads a bunch of treasure hunters out in to the desert to rediscover the ancient city of Hamunaptra which he unexpectedly came across during a battle.

However, they soon unearth more than they bargained for when they awaken the evil Imhotep who was buried alive to spend an undead eternity for having his wicked way with the Pharaoh's wife. Needless to say, he is a little grumpy. Accompanied by the love interest archaeologist Evie and her bungling brother Jonathan, O'Connell soon has to battle against the evil Imhotep before he resurrects his love and dooms the world.

Whilst some of the special effects are a little obvious at times, but both disc's picture and sound are excellent and it is difficult to tell them apart.

The cover artwork of the region 2 disc is spoilt with a huge sticker indicating 'stunning special features' in a probable attempt to reassure us that region 2 discs can offer us loads of extras. We are also told that it is the 'full uncut version' leaving me wondering what exactly I missed out on at the cinema.

Most of the extras which adorned the region 1 release appear to be present, although we are missing the showcase and optional music-only audio tracks.

The film is actually quite funny, especially as once resurrected the Mummy needs body parts to regenerate and promptly starts to kill off the treasure hunters. His first victim is a short-sighted American and the Mummy then stumbles his blurred way around.

Without question, the winner here has to be the region 2 version. If more distributors spent the time and effort adding the huge numbers of extras we have here as Columbia have done there would be no need for the public to buy region 1 discs. The only downside to this disc is, as I've mentioned before, the vandalism of the cover, which companies must stop doing. However, thumbs up and three cheers for Columbia. OK, so we lost some of the extras , but I suppose something had to be lost to fit on the German audio track.