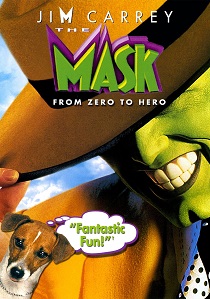 ReviewAdventureJim CarreyCameron Diaz
Review Article Go back to homepage
All round Mr. nice guy Stanley is a failure at romance and is down on his luck until he comes across a mysterious ancient mask. Once worn, it completely changes his personality and appearance to an indestructible and wise cracking hero. Will the personality of the mask or Stanley win the day?
Jim Carrey, Cameron Diaz, Peter Riegert, Peter Greene, Amy Yasbeck, Richard Jeni, Orestes Matacena, Tim Bagley, Nancy Fish
Action/Adventure
2
1 Hour 37 Minutes
Buy DVD
Story

Carrey plays a bank clerk in a dead end job until one day, out of the rain, comes the beautiful Tina who sings at the local club and is the girlfriend of local hoodlum Dorian. She has been sent to case out the bank ready for a robbery and Stanley is smitten. His plans to see her perform at the club are disastrous and whilst dejectedly walking home comes across the mysterious mask.

Once transformed into the mask we are treated to some comical scenes which only Carrey can pull off. The mask character then proceeds to rob the bank under the nose of Dorian and appears at his club with obvious consequences. Naturally, the police are interested in the bank robbery and a couple of bungling cops are placed on the job and soon suspect Stanley as the robber. However, Stanley's mask soon ends up in the hands of Dorian and he must then battle to get the mask back before he can execute his evil plan.

However, the film has been badly let down with a washed out picture and occasional synch problems, however this problem is only evident on certain DVD players. The sound is awesome, especially with the musical soundtrack with all that bass. The animated menus are possibly one of the best you'll see on a region two disc, but it's just a shame about the picture.

There are many funny moments in this film, with the car garage episode springing to mind, but it is Stanley's pet dog Milo which steals the show. It is especially funny when Milo manages to don the mask during the ultimate battle against Dorian and his gang and dishes out some doggy punishment.

The cartoon special effects are seamless and truly excellent, with Jim Carrey leading the way with his antics which made him a household name. Cameron Diaz was an unknown until this film, indeed she is way down the cast list credits at the end, but let us not forget one of the most astounding film entrances in film history with that stunning figure hugging dress. I'm sure many a bloke drooled over that scene!