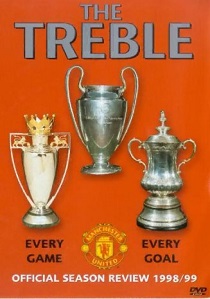 Review Article Go back to homepage
The Treble charts the course of Manchester United's 1998/99 season when against all odds they won "The League", F.A. Cup and European Cup.
Sport
All
2 Hours 10 Minutes
Buy DVD
Story

In the words of Sir Alex Ferguson "Football...Bloody Hell". It was said to be an impossible task, but it wasn't. This DVD charts an all conquering 1998-1999 season in which Manchester United won almost everything that was worth winning.

Artifacting is present everywhere, and its not just minor glitches, some encompass the entire picture making it look like a sliding picture puzzle. Artifacting is not the only problem with the picture though, it looks like someone has painted the screen with whitewash giving a gray tinge as if the brightness was too high.

The sound isn't any better either, I wasn't expecting 5.1 surround, but since the source of the material is from television I would have expected stereo as a minimum, but what we get here is a weak mono mix which sounds pathetic. Strangely, although the box out on the back of the case says the soundtrack is in mono, the Dolby Digital logo has been placed just next to it...Misleading? I think so.

Before each game headings appear giving the score line, unfortunately these look as if they were filmed using a camcorder, printed out using a cheap colour printer and cellotaped onto the master film. Not good.

Its just a shame that VCI couldn't be bothered to produce a DVD to warrant that amazing achievement. Being a Manchester United fan myself I was hoping for much more, but what I got was a DVD with great content, but one of the worst pictures I have ever seen.

There are good points though, the content is quite excellent giving every goal from every game. These can be accessed in a number of ways, either by month, by game, or you can even pick a player and see their goals for the season. You also get a fairly comprehensive interview with "Sir Alex" So to sum up...Great content...awful picture and sound.